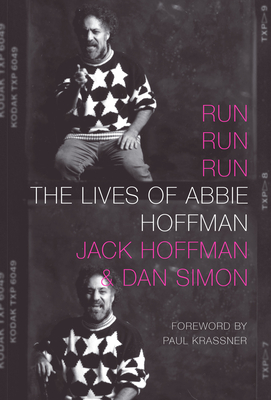 Intertwining the details of Abbie Hoffman's intense personal life with the movement politics of the sixties, seventies, and eighties, Dan Simon writes Abbie's story from the point of view of his younger brother Jack, creating a full and poignant portrait of one of the geniuses of the 1960s counterculture. From the creation of the Yippies in 1967 and the tumult of the 1968 Democratic National Convention protests, to the humor and agony of the Chicago conspiracy trial, the scandal of Abbie's 1973 cocaine bust, and his six and a half years as a fugitive, to his reemergence as environmentalist "Barrie Freed" and his final struggle with manic-depressive illness, this biography offers a thorough examination of the contradictions that make Abbie Hoffman such a compelling figure. With the information and affection only a brother could bring to the complexities of Abbie's life, Hoffman and Simon portray Abbie's public persona alongside his private aspirations and fears, romances, and enduring family relationships.

Jack Hoffman, Abbie's only brother, was also his longtime manager, researcher, and confidant. A businessman, he lives in Framingham, Massachusetts.

Editor and author Dan Simon founded Seven Stories Press in 1995, and the predecessor company Four Walls Eight Windows in 1984. While at Four Walls Eight Windows, Simon answered a classified ad that Abbie Hoffman had placed in the Nation and worked with Hoffman to produce his last book, The Best of Abbie Hoffman, an omnibus collection that included Abbie's three major works, Steal This Book, Woodstock Nation, and Revolution for the Hell of It, with a foreword by Norman Mailer. After Abbie's untimely death in the spring of 1989, Abbie's younger brother Jack approached Simon and asked him if he would write Abbie's biography from Jack's point of view, a brother's story, and Simon agreed. The first edition of Run Run Run: The Lives of Abbie Hoffman was published by Putnam under their Jeremy P. Tarcher imprint.

"I thought I knew Abbie Hoffman, but this book constantly fascinated me with its revelations. ...Behind Abbie's wild antics was a powerful seriousness of purpose -- a combination of qualities that made him a unique actor in the drama of our time. Run Run Run beautifully captures both the human being and that larger drama."
-- Howard Zinn, author of A People's History of the United States

"He stood up against arbitrary power, capricious power, arrogant and callous power. In other words, he stood up to the bullies. He had the courage for the rest of us."
-- Sydney Schanberg, author of The Killing Fields

"Jack's approach to his late brother is protective, but it rings with the truth of familial interaction... Run Run Run doesn't ignore Abbie's political, social, or personal mistakes... in giving us a fuller picture of the man, we can better put them in context."
--San Francisco Chronicle