The Essential Saker: From the Trenches of the Emerging Multipolar World (Hardcover) 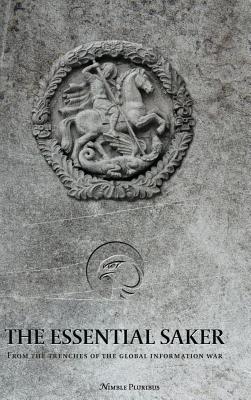 These are some of the most essential articles written by the Saker on his blog. Even though they cover topics ranging from history, to politics, to religion, to military affairs, to social issues, they are all linked by one common thread: the full-spectrum clash between the Western world and what the Saker calls the "Russian civilizational realm." Most Russians, especially when addressing a western audience, feel compelled to use a diplomatic and non-confrontational language. In contrast, Saker's style is informal, almost conversational, but also direct, even blunt. He is fully aware that his views might offend many of his readers, but he believes that there is also a bigger audience out there which will appreciate an honest and, above all, sincere criticism of what the Saker calls the "AngloZionist Empire." The careful reader, however, will notice that the Saker's criticisms are always aimed at a political system and its constituent institutions and supporting ideologies, but never at the people, nations or ethnicities. In fact, the Saker forcefully argues for a multi-cultural, multi-ethnic and multi-religious Russia which would be fully integrated in a multi-polar world inspired by the fraternal diversity of the BRICS countries. Underlying the Saker's entire worldview is a categorical rejection of all ideologies and a profound belief that the root of all evil as well as the key to defeating it is always in the realm of spirituality.

As telling the truth is becoming a nostalgic endeavour, its seeking is becoming an heroic adventure. The Saker will guide you through the mist of concealment and disinformation."

Paul Craig Roberts, former Assistant Secretary of the Treasury for Economic Policy in the Reagan administration and author of 12 books on contemporary politics:

"The Saker provides facts and analysis that are antidotes to the anti-Russian propaganda that prevails in the West."

"Reading the "Saker" is essential - it is at this media space where one can discern the real trenches and battle lines in today's super-charged information wars. I read the "Saker" not only for the facts (that are verified and applied in context), but also for a moral and discipled attitude toward geopolitics. The "Saker" is not only a good read; it is also a way of looking at the world. Simply put: the "Saker" is information that is weaponized and hits all the right targets "

The Saker community of blogs is the only such international and multi-lingual community of blogs. We collaborate with all the main English language blogs about Russia and the Ukraine. Our articles are often picked up by Russia Insider, the Asia Times, Information Clearing House and many others news sources and our work has been quoted by Paul Craig Roberts, Sheikh Imran Hosein, Pepe Escobar and many others.

The Saker was born in a military family of "White" Russian refugees in western Europe where he lived most of his life. After completing two college degrees in the USA, he returned to Europe were he worked as a military analyst until he lost his career due to his vocal opposition to the western-sponsored wars in Chechnia, Croatia, Bosnia and Kosovo. After re-training as a software engineer, he moved to the Florida where he now lives with his wife, a veterinarian, and their three children. When he does not blog or help his wife at work, the likes to explore the Florida wilderness on foot, mountain bike and kayak or play acoustic jazz guitar.