Call Them by Their True Names: American Crises (and Essays) (Hardcover) 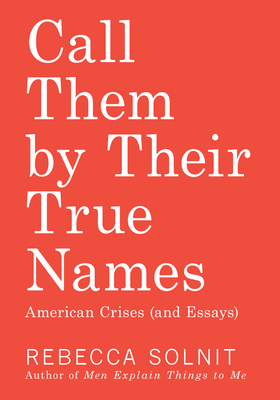 Call Them by Their True Names: American Crises (and Essays) (Hardcover)

Rebecca Solnit is the author of more than twenty books including the international bestseller Men Explain Things to Me. Called the voice of the resistance by the New York Times, she has emerged as an essential guide to our times, through her incisive commentary on feminism, violence, ecology, hope, and everything in between.

In this powerful and wide-ranging collection, Solnit turns her attention to battles over meaning, place, language, and belonging at the heart of the defining crises of our time. She explores the way emotions shape political life, electoral politics, police shootings and gentrification, the life of an extraordinary man on death row, the pipeline protest at Standing Rock, and the existential threat posed by climate change.

Changing the world means changing the story, the names, and the language in which we describe it. Calling things by their true names can also cut through the lies that excuse, disguise, avoid, or encourage inaction, indifference, obliviousness in the face of injustice and violence.

Writer, historian, and activist Rebecca Solnit is the author of twenty books on feminism, western and indigenous history, popular power, social change and insurrection, wandering and walking, hope and disaster, including a trilogy of atlases and the books The Mother of All Questions, Hope in the Dark, Men Explain Things to Me; The Faraway Nearby; A Paradise Built in Hell: The Extraordinary Communities that Arise in Disaster; A Field Guide to Getting Lost; Wanderlust: A History of Walking; and River of Shadows, Eadweard Muybridge and the Technological Wild West (for which she received a Guggenheim, the National Book Critics Circle Award in criticism, and the Lannan Literary Award). A product of the California public education system from kindergarten to graduate school, she is a columnist at Harper's.