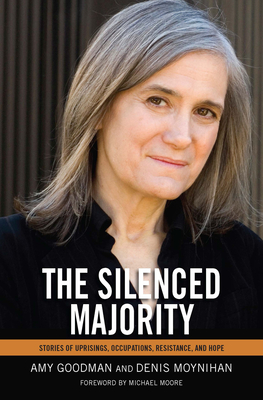 
Ships quickly (1-7 days)
In their new book, Amy Goodman and Denis Moynihan provide a vivid record of the events, conflicts, and social movements shaping our society today. They give voice to ordinary people standing up to corporate and government power across the country and around the world. Their writing and daily work at the grassroots public TV/radio news hour Democracy Now , carried on more than a thousand stations globally and at democracynow.org, casts in stark relief the stories of the silenced majority. These stories are set against the backdrop of the mainstream media's abject failure, with its small circle of pundits who know so little about so much, attempting to explain the world to us and getting it so wrong.

Amy Goodman is a multiple New York Times bestselling author, and the host/executive producer of Democracy Now!, a daily, independent news program airing on more than 800 television and radio stations. TIME Magazine named Democracy Now! its Pick of thePodcasts, along with NBC's Meet the Press. Goodman is the first journalist to receive the Right Livelihood Award, widely known as the 'Alternative Nobel Prize' for developing an innovative model of truly independent grassroots political journalism that brings to millions of people the alternative voices that are oftenexcluded by the mainstream media. Denis Moynihan, since helping co-found Democracy Now! as an independent production company in 2002, he has participated in the organization's growth, focusing primarily on distribution, infrastructure development, and coordinating complex live broadcasts from all continents (save Antarctica). He lives in Denver, and is the founder of a new noncommercial, community radio station in Colorado's high country.

Amy Goodman is not afraid to speak truth to power. She does it every day.”
Susan Sarandon

A towering progressive freedom fighter in the media and the world.”
Cornel West

What journalism should be: beholden to the interests of people, not power and profit.”
Arundhati Roy