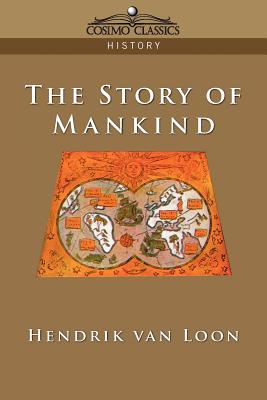 History is the mighty Tower of Experience, which Time has built amidst the endless fields of bygone ages. It is no easy task to reach the top of this ancient structure and get the benefit of the full view. There is no elevator, but young feet are strong and it can be done. -Hendrik Van Loon, in the Foreword to The Story of Mankind It was intended for children, and of course much of the science is hopelessly out of date, but this ambitious, even audacious attempt to offer an overview of the entirety of human history remains a breathtaking work today. A 1921 bestseller, The Story of Mankind won the first Newbery Medal in 1922, and it is no wonder: the book-which begins with the origin of life itself on our planet and the arrival of the earliest protohumans on the scene and ends with "The Last Fifty Years, Including Several Explanations and an Apology"-is abundant with an offbeat charm and packed with the author's own beautiful illustrations and maps that are alive with a fresh, delectable humor. As a document of early modern science writing, it is invaluable. As a delightfully entertaining read, it is not to be missed. AUTHOR BIO: Dutch-American author and educator Hendrik Willem van Loon (1882-1944) sold more than six million books during his lifetime, including The Story of the Bible (1923), Tolerance (1925), and America (1927). After studies at Harvard, Cornell, and the University of Munich, he had a diverse career as a popular professor of European history at Cornell and of social sciences at Antioch College, an Associated Press correspondent in revolutionary Russia and World War I Belgium, and associate editor of the Baltimore Sun from 1923 to 1924. In appreciation for his dedicated anti-Nazi writing during World War II, he was awarded the Order of Knight of the Netherlands Lion.