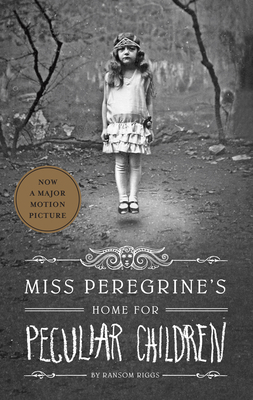 By Ransom Riggs
$10.99
Not on our shelves at the moment, but we will order it for you.

— From About JK Rowling

A mysterious island.   An abandoned orphanage.   A strange collection of very curious photographs.  It all waits to be discovered in Miss Peregrine’s Home for Peculiar Children, an unforgettable novel that mixes fiction and photography in a thrilling reading experience. As our story opens, a horrific family tragedy sets sixteen-year-old Jacob journeying to a remote island off the coast of Wales, where he discovers the crumbling ruins of Miss Peregrine’s Home for Peculiar Children. As Jacob explores its abandoned bedrooms and hallways, it becomes clear that the children were more than just peculiar. They may have been dangerous. They may have been quarantined on a deserted island for good reason. And somehow—impossible though it seems—they may still be alive.   A spine-tingling fantasy illustrated with haunting vintage photography, Miss Peregrine’s Home for Peculiar Children will delight adults, teens, and anyone who relishes an adventure in the shadows.

“A tense, moving, and wondrously strange first novel. The photographs and text work together brilliantly to create an unforgettable story.”—John Green, New York Times best-selling author of The Fault in Our Stars

“‘Peculiar’ doesn’t even begin to cover it. Riggs’ chilling, wondrous novel is already headed to the movies.”—People

“You’ll love it if you want a good thriller for the summer. It’s a mystery, and you’ll race to solve it before Jacob figures it out for himself.”—Seventeen

“A tense, moving, and wondrously strange first novel. The photographs and text work together brilliantly to create an unforgettable story.”—John Green, New York Times best-selling author of Looking for Alaska and Paper Towns

“Readers searching for the next Harry Potter may want to visit Miss Peregrine’s Home for Peculiar Children.”—CNN

“Riggs deftly moves between fantasy and reality, prose and photography to create an enchanting and at times positively terrifying story.”—Associated Press

“I read all of the Miss Peregrine’s Peculiar Children books and I loved them.”—Florence of Florence + The Machine

“Peculiar’ doesn’t even begin to cover it. Riggs’ chilling, wondrous novel is already headed to the movies.”—People

“You'll love it if you want a good thriller for the summer. It's a mystery, and you'll race to solve it before Jacob figures it out for himself.”—Seventeen

“One of the coolest, creepiest YA books.”—PopSugar