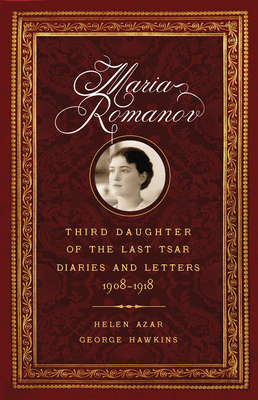 The First English Translation of the Intimate Writings of a Member of the Last Russian Imperial Family
In the twilight of the nineteenth century, a third daughter was born to Tsar Nicholas II and his wife Alexandra. Grand Duchess Maria Nikolaevna—known to her family and friends simply as “Mashka”—grew into an empathetic, down-to-earth girl, unaffected by her imperial status. Often overshadowed by her two older sisters, Olga and Tatiana, and later, her brother Alexei and younger sister Anastasia, Maria ultimately proved to have a uniquely strong and solid personality.
In Maria Romanov: Third Daughter of the Last Tsar, Diaries and Letters, 1908–1918, by translator and researcher Helen Azar with George Hawkins, Mashka’s voice is heard again through her intimate writings, presented for the first time in English. The Grand Duchess was much more than a pretty princess wearing white dresses in hundreds of faded sepia photographs; Maria’s surviving diaries and letters offer a fascinating insight into the private life of a loving family—from festivals and faith, to Rasputin and the coming Revolution; it is clear why this middle child ultimately became a pillar of strength and hope for them all. Maria’s gentle character belied her incredible courage, which emerged in the darkest hours of her brief life. “The incarnation of modesty elevated by suffering,” as Maria was described during the last weeks of her life, she was able to maintain her kindness and optimism, even in the midst of violence and degradation.
On a stuffy summer night in 1918, only a few weeks after her nineteenth birthday, Maria was murdered along with the rest of her family in a cellar of a house chosen for this “special purpose.” Two sets of charred remains, confirmed to be Maria’s and her brother Alexei’s, were not discovered until almost ninety years later, separately from those of the other victims of the massacre. As the authors relate, it is still unknown if these remains will ever be allowed to be laid to rest.

Helen Azar is a librarian, translator, and historian, and founder of the popular Russian imperial history blog, TheRomanovFamily.com. She has published eight books based on the personal writings of Russia’s last imperial family. She lives in Australia with her husband.

George Hawkins is a teacher in South Auckland, New Zealand, where he lives with his wife and children. Fluent in several languages, he has embarked on translating the letters and diaries of Nicholas II’s family.

“Helen Azar provides a wonderful service for all those interested in the Romanovs with her translations of their letters and diaries. Here it is the turn of Maria, the third daughter of Nicholas and Alexandra, and her lively personality shines from these pages. Historians have always described Maria as a loving and friendly girl, but in her diaries we see evidence of a sparkly sense of humour too. The story in which she got stuck in snow in a graveyard is told with true comedian’s style. And I love her descriptions of the “officer who stinks and is afraid of dressings” and the one who is 'fat and not too smart.' There is more personality here than in Olga’s and Tatiana’s diaries and letters, in my opinion, and I absolutely loved reading it. No wonder Nicholas said Maria’s letters made him laugh! Helen Azar and her coauthor on this volume, George Hawkins, do an admirable job of working out who or what is being referred to, which is no mean feat given the Russians’ love of nicknames, and she adds footnoted explanations of games and ceremonies referred to. Her introduction is a summing-up of the Romanovs’ fate, and a vivid description of the lovely personality of Maria herself. Ultimately, of course, the book is very poignant. Maria is trying to put on a brave face in Tobolsk when she writes 'All in all things are pretty good.' There are scarcely any complaints or signs of fear. She sounds remarkable, and reading this book really underscores the tragedy of what ultimately happened to the family.”—Gill Paul, author of The Lost Daughter and The Secret Wife