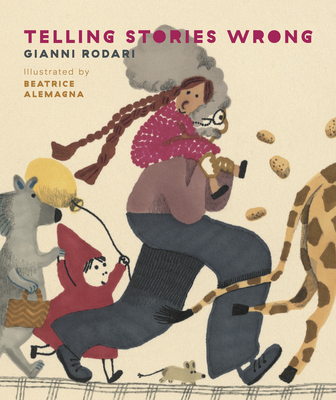 "Once upon a time, there was a little girl called Little Yellow Riding Hood--" "Not yellow It's Red Riding Hood " So begins the story of a grandpa playfully recounting the well-known fairytale--or his version, at least--to his granddaughter. Try as she might to get him back on track, Grandpa keeps on adding things to the mix, both outlandish and mundane The end result is an unpredictable tale that comes alive as it's being told, born out of imaginative play and familial affection. This spirited picture book will surprise and delight from start to finish, while reminding readers that storytelling is not only a creative act of improvisation and interaction, but also a powerful pathway for connection and love.

Telling Stories Wrong was written by Gianni Rodari, widely regarded as the father of modern Italian children's literature. It exemplifies his great respect for the intelligence of children and the kind of work he did as an educator, developing numerous games and exercises for children to engage and think beyond the status quo, imagining what happens after the end of a familiar story, or what possibilities open up when a new ingredient is introduced. This book is illustrated with great affection by the illustrious artist Beatrice Alemagna (Child of Glass), who counts Gianni Rodari as one of her "spiritual fathers."

Italian author Gianni Rodari wrote many beloved children's books and was awarded the prestigious Andersen Prize. But he was also an educator of paramount importance in Italy and an activist who understood the liberating power of the imagination. He is one of the twentieth century's greatest authors for children, and Italy's greatest. Influenced by French surrealism and linguistics, Rodari stressed the importance of poetic language, metaphor, made-up language, and play. At a time when schooling was all about factual knowledge, Rodari wrote The Grammar of Fantasy, a radically imaginative book about storytelling and play. He was a forerunner of writing techniques such as the "fantastic binomial" and the utopian, world engendering "what if...." The relevance of Rodari's works today lies in his poetics of imagination, his humanist yet challenging approach to reality, and his themes, such as war and peace, immigration, injustice, inequality, and liberty. Forty years after his death, Rodari's writing is as powerful and innovative as ever. He died in Rome in 1980.Beatrice Alemagna has written and illustrated dozens of children's books, which have received numerous awards all over the world and have been translated into 14 languages. The author-illustrator of two New York Times Best Illustrated books, she has also been nominated for the Astrid Lindgren Memorial Award seven times and shortlisted for the Hans Christian Andersen Award twice. Enchanted Lion has published four of her picture books: The Wonderful Fluffy Little Squishy; Child of Glass; Telling Stories Wrong; and the forthcoming You Can't Kill Snow White, a picture book for teens and adults, published under Enchanted Lion's Unruly imprint. Born in Bologna, Italy, Alemagna lives and works in Paris, France.