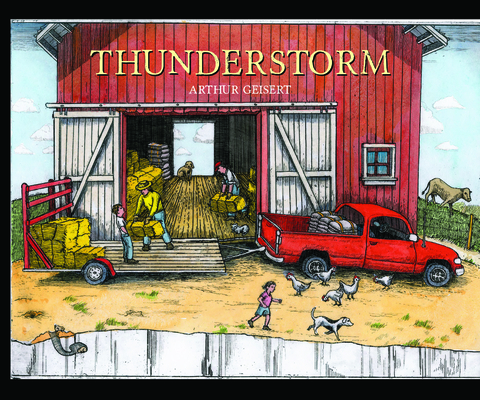 Thunderstorm follows the course of a storm through midwestern farm country minute-by-minute, hour-by-hour, from late morning into late afternoon. As always with Arthur Geisert, it is a meticulously executed and visually stunning piece of work. Other than the timeline that runs along the bottom border of the illustrations, there is no text, and the illustrations are continuous.

Through keen observation, Geisert beautifully captures the nuances and details of a midwestern thunderstorm, from the ever-changing color of the sky, to the actions of the human inhabitants, to the reactions of the natural world to the wind and rain. America's heartland is somewhat unfamiliar territory in the realm of picture books, but in Thunderstorm, Geisert has provided readers with valuable, breathtaking insight into one of its most natural occurrences.

Arthur Geisert grew up in Los Angeles, California, and claims not to have seen a pig until he was an adult. Trained as a sculptor in college, Geisert learned to etch at the Otis Art Institute in Los Angeles. Geisert has published just about a book a year for the past thirty years. Every one of his books has been illustrated with etchings. His work has appeared in The New Yorker and The Horn Book Magazine. In 2010 his book Ice was selected as a New York Times Book Review Best Illustrated book of the year. Geisert currently lives in a converted bank building in Bernard, Iowa.

Award-winning children's book author Arthur Geisert has been creating etchings and hand-painting them in watercolor for picture books for over thirty years. Geisert grew up in LA and learned to etch at the Otis Art Institute. Geisert's work has appeared in The New Yorker and The Horn Book Magazine. In 2010, his book ICEwas selected as a New York Times Book Review Best Illustrated Book of the Year. It was the third time that his work was honored with the New York Times Award. While Geisert's books have been a big hit with children and adults alike, his work has also been recognized within the art world. He has exhibited his meticulous, lavishly detailed, hand-colored etchings at the Art Institute of Chicago and his work is in the collections of several different museums. Geisert currently lives in a converted bank building in Bernard, Iowa.