Cruisers: Selected Photos from the Archives of the Kure Maritime Museum the Best from the Collection of Shizuo Fukui's Photos of (Hardcover) 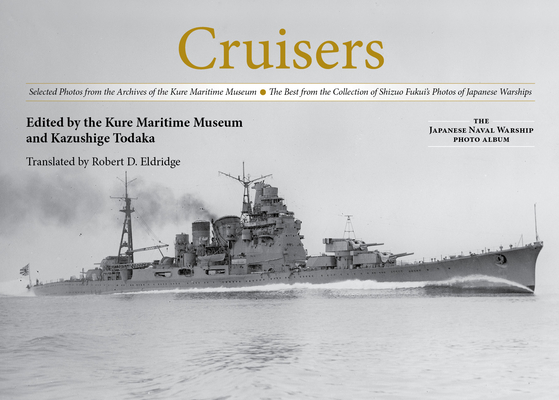 Originally published in Japan in 2005, each album in the Japanese Naval Warship photo album series contains official photographs taken by the Kure Maritime Museum, as well as those taken by private individuals. These pictorial records document the main types of Japanese vessels, from battleships to submarines, based on the best images from Shizuo Fukui, a former Imperial Japanese Navy commander and technician. These photos include the ones Fukui began collecting as a young boy and continued to acquire after he began work as a naval shipbuilder, and those that he received in order to complete a photographic history of the Imperial Japanese Navy's ships. The latter included images gathered by Kiyoshi Nagamura, a shipbuilder who proactively collected photos, and from the collection of machinist Yoshiyuki Amari. Moreover, with the help of shipbuilder Shigeru Makino, among others, Fukui was able to continue gathering photographs and other items throughout the postwar period. Thus it is not an exaggeration to say that Fukui dedicated his entire life to this work. These images are especially valuable because of the widespread destruction of official documents at the end of the war. The Kure Maritime Museum (more commonly known as the Yamato Museum), which opened on April 23, 2005, is located in Kure City, Hiroshima Province. It houses more than twenty thousand Imperial Japanese Navy photos. The collection focuses on the lives of key people in the city, as well as its culture and its industries, primarily shipbuilding and steelmaking--both of which were crucial to the establishment of the modern Japanese nation. The museum's aim is to introduce Japanese history and showcase the technological achievements of previous generations, as well as to emphasize the importance of peace.

THE KURE MARITIME MUSEUM (also known as the Yamato Museum) is located in Kure City, Hiroshima Province. Its collection focuses on the people and culture of Kure, as well as its industries, primarily shipbuilding and steelmaking. The museum houses more than twenty thousand Imperial Japanese Navy photos. KAZUSHIGE TODAKA, the director of the Kure Maritime Museum, is the co-author of several books on the Japanese navy. ROBERT D. ELDRIDGE is the author of dozens of books in English and Japanese on U.S.-Japanese relations, Okinawa, and Japanese politics. He received a PhD in political science from Kobe University. He resides with his family in Japan.