How Much is Enough?: Money and the Good Life (Hardcover) 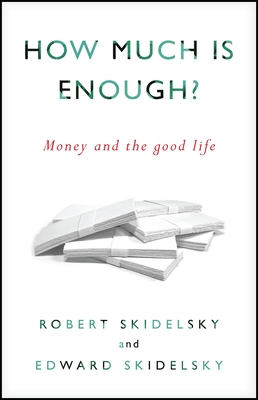 By Robert Skidelsky, Edward Skidelsky
$24.95
Email or call for price.

A provocative and timely call for a moral approach to economics, drawing on philosophers, political theorists, writers, and economists from Aristotle to Marx to Keynes.

What constitutes the good life? What is the true value of money? Why do we work such long hours merely to acquire greater wealth? These are some of the questions that many asked themselves when the financial system crashed in 2008. This book tackles such questions head-on.
The authors begin with the great economist John Maynard Keynes. In 1930 Keynes predicted that, within a century, per capita income would steadily rise, people’s basic needs would be met, and no one would have to work more than fifteen hours a week. Clearly, he was wrong: though income has increased as he envisioned, our wants have seemingly gone unsatisfied, and we continue to work long hours.
The Skidelskys explain why Keynes was mistaken. Then, arguing from the premise that economics is a moral science, they trace the concept of the good life from Aristotle to the present and show how our lives over the last half century have strayed from that ideal. Finally, they issue a call to think anew about what really matters in our lives and how to attain it.
How Much Is Enough? is that rarity, a work of deep intelligence and ethical commitment accessible to all readers. It will be lauded, debated, cited, and criticized. It will not be ignored.

Edward Skidelsky is a lecturer at Exeter University, specializing in aesthetics and moral philosophy. He contributes regularly to the New Statesman, Telegraph, and Prospect on philosophy, religion, and intellectual history.

"What perfect timing!  How Much is Enough? is what every graying Baby Boomer I know is asking right now. The Skidelskys argue that time is not ONLY money, as many driven New Yorkers seem to think, and urge workaholic Americans to devote more of it to pursuing the good life.  Sounds like wise advice to me. As my desk mate at the New York Times in the 1990s used to remind me at least once a day: All you really HAVE is your TIME ." —Sylvia Nasar, author of Grand Pursuit: The Story of Economic Genius

"Deeply provocative and intellectually suggestive...Offers some bold and lucid proposals about what we can do to rein in the fever of reductive economism and toxic acquisitiveness." —Prospect, Rowan Williams, Archbishop of Canterbury

"The Skidelskys ask a pivotal question: Is there no end to our constant quest for more and more wealth? As the world economy stutters and we look for ways to restart the engine, their arguments pull us up short. Are we not prosperous enough already and missing a far richer life without the perpetual quest for needless economic growth?" —Nicholas Wapshott, author of Keynes Hayek: The Clash That Defined Modern Economics

"The over-all thrust of their polemic is a welcome call to reinvigorate society's ethical aspect and bring about the good life for everyone." —The New Yorker

"How Much Is Enough? is a delightful book. It addresses a Big Question without the jargon and obfuscation that pollutes so much philosophy. The prose is lucid, and all the relevant issues are raised and addressed." —The Wall Street Journal

“The authors turn to historical fiction, philosophy, and political theory, drawing on Faust, Marx’s critique of capitalism, and Aristotle’s uses of wealth. Their conclusion that concepts like respect, friendship, and community are more likely to contribute to satisfaction and overall happiness than wealth makes for a fascinating, if cerebral, read.”  —Publishers Weekly

“A provocative and articulate discourse on the dismal science and moral philosophy.” —Kirkus

“The Skidelskys move seamlessly from the abstract to the concrete; from philosophy to public policy.” —The Independent

"There is a rigor in their view of leisure. It is productive, but not so much of things as of experiences animated by intrinsic motivation. Eliminate the propulsive force of self-interest narrowly pursued, and leisure becomes a form of social wellness, a striving for the common good rather than the individual accumulation of more and more." —Portland Book Review

"[An] intelligent, impassioned, provocative treatise to those who wonder if materialism is necessary to the good life." —Get Abstract

"[B]reath-taking analysis of capitalism as a Faustian bargain with the devil." —Book News