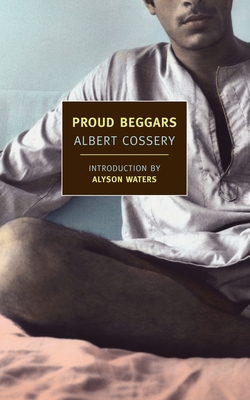 Albert Cossery celebrated laziness. Fortunately for us, every once in a while he wrote a novel. His books are revolutionary and hilarious. This is his best.

Early in Proud Beggars, a brutal and motiveless murder is committed in a Cairo brothel. But the real mystery at the heart of Albert Cossery’s wry black comedy is not the cause of this death but the paradoxical richness to be found in even the most materially impoverished life.

Chief among Cossery’s proud beggars is Gohar, a former professor turned whorehouse accountant, hashish aficionado, and street philosopher. Such is his native charm that he has accumulated a small coterie that includes Yeghen, a rhapsodic poet and drug dealer, and El Kordi, an ineffectual clerk and would-be revolutionary who dreams of rescuing a consumptive prostitute. The police investigator Nour El Dine, harboring a dark secret of his own, suspects all three of the murder but finds himself captivated by their warm good humor. How is it that they live amid degrading poverty, yet possess a joie de vivre that even the most assiduous forces of state cannot suppress? Do they, despite their rejection of social norms and all ambition, hold the secret of contentment? And so this short novel, considered one of Cossery’s masterpieces, is at once biting social commentary, police procedural, and a mischievous delight in its own right.

Albert Cossery (1913–2008) was a Cairo-born French writer of Lebanese and Greek Orthodox Syrian descent who settled in Paris at the end of the Second World War and lived there for the rest of his life. The son of an illiterate mother and a newspaper-reading father with a private income from inherited property, Cossery was educated from a young age in French schools, where he received his baccalauréat and developed a love of classical literature. At age seventeen he made a trip to the French capital with the intention of continuing his studies
there. Instead he joined the Egyptian merchant marine, eventually serving as chief steward on the Port Said–New York line. When he was twenty-seven his first book, Men God Forgot, was published in Cairo and, with the help of Henry Miller, in the United States. In 1945 he returned to Paris to write and live alongside some of the most influential writers and artists of the last century, including Albert Camus, Jean-Paul Sartre, Tristan Tzara, Alberto Giacometti, Lawrence Durrell, and Jean Genet. He was also, briefly, married to the actress Monique Chaumette. In 1990 Cossery was awarded the Grand Prix de la francophonie de l’Académie française and in 2005 the Grand Prix Poncetton de la Société des gens de lettres. In recent years several of his books have been newly translated into English, including A Splendid Conspiracy, The Colors of Infamy, and The Jokers (which is available as an NYRB Classic).

Alyson Waters has translated several works from the French, including two by Albert Cossery. She has received a National Endowment for the Arts Translation Fellowship, a PEN Translation Fund grant, and residency grants from the Centre national du livre, the Villa Gillet in Lyon, France, and the Banff International Literary Translation Centre. She teaches literary translation in the French Departments of Yale University and NYU, is the managing editor of Yale French Studies, and lives in Brooklyn, New York.

“The book that perhaps best expresses Cossery’s characteristic outlook on life and is still his best-known work. Marked by Cossery’s trademark elegance, the novel is humorous and reflective by turns. This is a world of simple pleasures, charming humour and the mockery of anything that might smack of authority.”  —David Tresilian, Al Ahram Weekly

“Albert Cossery...ought to be a household name. he’s that good: an elegant stylist, an unrelenting ironist, his great subject the futility of ambition ‘in a world where everything is false.’” —David Ulin, Los Angeles Times