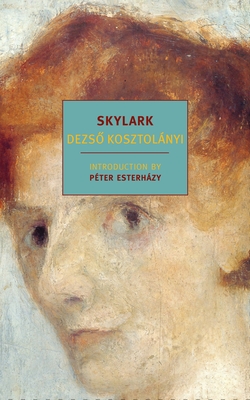 “New York Review Books' newest release is from the Hungarian author, Dezso Kostolanyi. Written in 1910, it explores family relationships with sparkling humor that is surprisingly relevant to modern times. Skylark is a middle-aged spinster residing with her doting parents in a small village, a microcosm of the universe. She leaves her parents for a week's vacation in the country, and, after an anguished parting, the parents engage with old compatriots and discover a zest long absent from their lives. With their newfound vigor Skylark's parents await the impending reunion with their daughter in this delightful romp of a novel. A keen wit and flair for the absurdities of human nature capture the complexities of family and village life in Europe at the turn of the century. Linda Gurrister”
— Betsy Burton, The King's English, Salt Lake City, UT

It is 1900, give or take a few years. The Vajkays—call them Mother and Father—live in Sárszeg, a dead-end burg in the provincial heart of the Austro-Hungarian Empire. Father retired some years ago to devote his days to genealogical research and quaint questions of heraldry. Mother keeps house. Both are utterly enthralled with their daughter, Skylark. Unintelligent, unimaginative, unattractive, and unmarried, Skylark cooks and sews for her parents and anchors the unremitting tedium of their lives.

Now Skylark is going away, for one week only, it’s true, but a week that yawns endlessly for her parents. What will they do? Before they know it, they are eating at restaurants, reconnecting with old friends, attending the theater. And this is just a prelude to Father’s night out at the Panther Club, about which the less said the better. Drunk, in the light of dawn Father surprises himself and Mother with his true, buried, unspeakable feelings about Skylark.

Then, Skylark is back. Is there a world beyond the daily grind and life's creeping disappointments? Kosztolányi’s crystalline prose, perfect comic timing, and profound human sympathy conjure up a tantalizing beauty that lies on the far side of the irredeemably ordinary. To that extent, Skylark is nothing less than a magical book.

Dezso Kosztolányi (1885-1936) was born in Subotica, a provincial Austro-Hungarian city (located in present-day Serbia) that would serve as the model for the fictional town in which he later set several novels, including Skylark. His father was the headmaster of the local gymnasium, which he attended until he was expelled for insubordination. Kosztolányi spent three years studying Hungarian and German at the University of Budapest, but quit in 1906 to go into journalism. In 1908 he was among the first contributors to the legendary literary journal Nyugat; in 1910, the publication of his second collection of poems, The Complaints of a Poor Little Child, caused a literary sensation. Kosztolányi turned from poetry to fiction in the 1920s, when he wrote the novels Nero, the Bloody Poet (to which Thomas Mann contributed a preface); Skylark; and Anna Edes. An influential critic and, in 1931, the first president of the Hungarian PEN Club, Kosztolányi was also celebrated as the translator of such varied writers as Shakespeare, Lewis Carroll, Oscar Wilde, Verlaine, Baudelaire, Goethe, and Rilke, as well as for his anthology of Chinese and Japanese poetry. He was married to the actress Ilona Harmos and had one son.

Richard Aczel teaches English literature at the University of Cologne, Germany. He is a playwright and founding director of the theater company Port in Air. His translations from the Hungarian include Ádám Bodor’s The Euphrates at Babylon and Péter Esterházy’s The Glance of Countess Hahn-Hahn: Down the Danube.

Péter Esterházy was born in Budapest in 1950. He is one of Hungary’s most prominent writers, and his short stories, novels, and essays have been published in more than twenty languages.

"Dezso Kosztolányi belonged to a remarkable generation of Central European writers. This novel is a masterpiece. From the opening sentences, he is drawing on nuance and subtle detail; comedy and pathos. Every gesture speaks volumes…..for all the humour and the easy comedy this lively study of small life is as profound as a prayer, as subtle as a lament." –The Irish Times

"This short, perfect novel seems to encapsulate all the world’s pain in a soap bubble. Its surface is as smooth as a fable, its setting and characters are unremarkable, its tone is blithe, and its effect is shattering." –Deborah Eisenberg, The New York Review of Books

“The risks of projects like the Central European Classics is that some of the books will proved to be worthy rather than interesting novels which one reads out of duty rather than pleasure. This is not at all the case with Dezso Kosztolanyi’s Skylark; I cancelled a dinner engagement because it was too gripping to put down.” –The Guardian (London)

“Kosztolanyi’s precise description of his chosen microcosm has produced a gem of a book that is completely convincing in its depiction of characters and the society they move in…The language is invigorating and at times hilarious.” –The Independent (London)

“Beneath this gentile satire, Kosztolanyi is steadily subverting the arrogant certainties of his times, from the vainglory of the Austrian hierarchy and its rural quislings to the loud but empty boasting of the oppressed intelligentsia.” –The Observer (London)

“Examining the unaddressed tensions of the Vajkay family, Skylark...depicts the closed, debilitating atmosphere of provincial life in the dying days of the Austro-Hungarian empire…Richard Acze’s line version of Skylark catches its author’s irony and sharp, atmospheric nuance. This hidden masterpiece is now being presented to a wide audience, an event to be celebrated.” –The Irish Times

“Skylark, published in Hungarian in 1924, is the most original, economical and painful novel I have read in a long time.” –The Times (London)

“..a superb, deeply poignant short novel, but also of a gifted translator…I believe that anyone can enjoy, say, Skylark as literature in English, even if they have no special knowledge of, or interest in, Hungary and the lost world of the Habsburg monarchy…Kosztolanyi’s writing is good enough to transcend the cultural difference that does exist.” –Timothy Garton-Ash, The Independent (London)

“Kosztolanyi was a ringleader in the 20th-century flowering of Hungarian literature, a poet who reformed the language, and a fiction writer of world class.” –The Guardian (London)

"...[an] alternately hilarious and melancholy classic of Hungarian literature...The author slyly depicts a smalltown life that remains curiously relevant today with his exploration of the tension between the politics of the left and the right, atheism and Christianity, and parents and their children. Though written 80 years ago, this remains a deftly executed, thoughtful meditation on mortality and the passage of time." –Publishers Weekly

“This short, perfect novel seems to encapsulate all the world’s pain in a soap bubble. Its surface is as smooth as a fable, its setting and characters are unremarkable, its tone is blithe, and its effect is shattering.” –Deborah Eisenberg, The New York Review of Books

"Dezso Kosztolányi belonged to a remarkable generation of Central European writers. This novel is a masterpiece. From the opening sentences, he is drawing on nuance and subtle detail; comedy and pathos. Every gesture speaks volumes.....for all the humour and the easy comedy this lively study of small life is as profound as a prayer, as subtle as a lament." –The Irish Times