Cambodia's Curse: The Modern History of a Troubled Land (Hardcover) 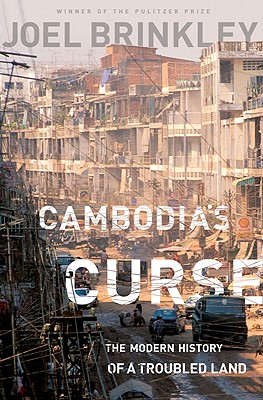 By Joel Brinkley
This book might be hard to find. Ask a bookseller for more information.
Special Order

Joel Brinkley, a professor of journalism at Stanford University, is a twenty-three-year veteran of the New York Times. He has worked in more than fifty nations and writes a nationally syndicated op-ed column on foreign policy. He won the Pulitzer Prize for International Reporting in 1980 and was twice a finalist for an investigative reporting Pulitzer in the following years. This is his fifth book.

Kirkus, February 15, 2011
“An excellent…account of a country whose historic poverty, exacerbated by the Vietnam War, remains remarkably unchanged.”

Publishers Weekly
“A riveting piece of literary reportage.”
Booklist“A heartbreaking but vital status report on a people who deserve far better.” Foreign Affairs, May/June 2011“Brinkley cuts a clear narrative path through the bewildering, cynical politics and violent social life of one of the worlds most brutalized and hard-up countries.”
San Francisco Chronicle, April 16, 2011
“As a young reporter, Brinkley won a Pulitzer Prize in 1980 for his coverage of the Cambodian refugee crisis. Returning to the region 30 years later, Brinkley - now a professor of journalism at Stanford - chose his subject well…[he] admirably…demonstrates that Hun Sen's administration has been a disaster for many Cambodians.”

The Wall Street Journal, May 19, 2011
“Illuminating…Mr. Brinkley won the Pulitzer Prize in 1980 for covering Cambodian refugees, and he weaves the details of the nation's underbelly into a compelling argument, interviewing powerful figures and foreign officials involved in politics, courts, hospitals, land development, forests and schools.”

The American Interest, July/August, 2011“Compelling… a revealing tale of delusion and corruption told with considerable panache.”