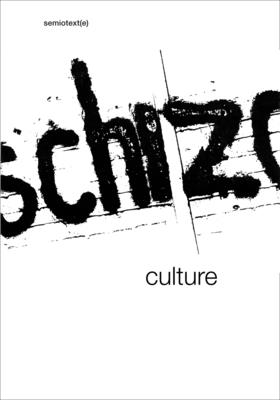 Never-before-published lectures, Q&As, and squabbles from the conference that introduced French theory into America, with a facsimile of the journal issue that emerged from it.

I think "schizo-culture" here is being used rather in a special sense. Not referring to clinical schizophrenia, but to the fact that the culture is divided up into all sorts of classes and groups, etc., and that some of the old lines are breaking down. And that this is a healthy sign.
--William Burroughs, from Schizo-Culture

The legendary 1975 "Schizo-Culture" conference, conceived by the early Semiotext(e) collective, began as an attempt to introduce the then-unknown radical philosophies of post-'68 France to the American avant-garde. The event featured a series of seminal papers, from Deleuze's first presentation of the concept of the "rhizome" to Foucault's introduction of his History of Sexuality project. The conference was equally important on a political level, and brought together a diverse group of activists, thinkers, patients, and ex-cons in order to address the challenge of penal and psychiatric institutions. The combination proved to be explosive, but amid the fighting and confusion "Schizo-Culture" revealed deep ruptures in left politics, French thought, and American culture.

The "Schizo-Culture" issue of the Semiotext(e) journal came three years later. Designed by a group of artists and filmmakers including Kathryn Bigelow and Denise Green, it documented the chaotic creativity of an emerging downtown New York scene, and offered interviews with artists, theorists, writers, and No Wave and pre-punk musicians together with new texts from Deleuze, Foucault, R. D. Laing, and other conference participants.