Molecules: The Elements and the Architecture of Everything (Hardcover) 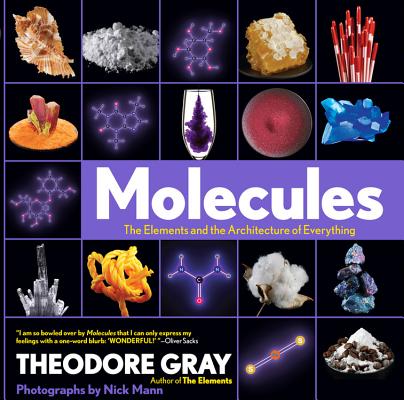 Molecules: The Elements and the Architecture of Everything (Hardcover)


Ships quickly (1-7 days)
In his highly anticipated sequel to The Elements, Theodore Gray demonstrates how the elements of the periodic table combine to form the molecules that make up our world.

Everything physical is made up of the elements and the infinite variety of molecules they form when they combine with each other. In Molecules, Theodore Gray takes the next step in the grand story that began with the periodic table in his best-selling book, The Elements: A Visual Exploration of Every Known Atom in the Universe. Here, he explores through fascinating stories and trademark stunning photography the most interesting, essential, useful, and beautiful of the millions of chemical structures that make up every material in the world.

Gray begins with an explanation of how atoms bond to form molecules and compounds, as well as the difference between organic and inorganic chemistry. He then goes on to explore the vast array of materials molecules can create, including: soaps and solvents; goops and oils; rocks and ores; ropes and fibers; painkillers and dangerous drugs; sweeteners; perfumes and stink bombs; colors and pigments; and controversial compounds including asbestos, CFCs, and thimerosal.

Big, gorgeous photographs, as well as diagrams of the compounds and their chemical bonds, rendered with never before seen beauty, fill the pages and capture molecules in their various states.

As he did in The Elements, Gray shows us molecules as we've never seen them before. It's the perfect book for his loyal fans who've been eager for more and for anyone fascinated with the mysteries of the material world.
Theodore Gray is the author of The Elements, Molecules, and Reactions, as well as Theodore Gray's Completely Mad Science. He is the creator of the bestselling iPad apps "Elements" and "Molecules," which have both been named "App of the Week" by Apple and was Director of "Disney Animated" (also honored by Apple as "iPad App of the Year"). Gray appeared on stage with Steve Jobs several times in his capacity as a software creator. He also co-founded Wolfram Research, Inc., makers of the widely-used software Mathematica and the Wolfram Alpha website. He lives in Urbana, Illinois.

Nick Mann is a photographer specializing in taking beautiful photos of inanimate objects on black backgrounds. His other work includes Molecules,, Reactions, and How Things Work. Originally of Urbana, IL, he lives in Champaign, IL and North Liberty, IA, where he is working towards a geology degree at Cornell College.

I am so bowled over by Molecules that I can only express my feelings with a one-word blurb: "WONDERFUL!" — Oliver Sacks

"Molecules is like dipping your toe in a clear shallow pool—with transparent explanations, shimmering graphics, and luminous photography—then suddenly realizing you are happily swimming in deep waters, relaxed and having fun!  The science here is presented so elegantly you'll feel like you are holding a jewelry catalog, and it's impossible to put down. A must have for anyone of any age or education."  — Jamie Hyneman, Host, MythBusters