The Psychic Vampire Codex: A Manual of Magick and Energy Work (Paperback) 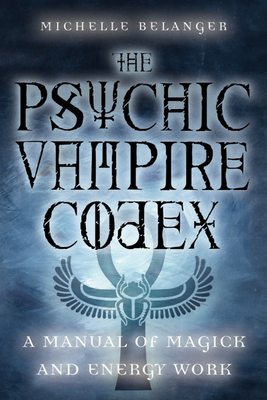 By Michelle Belanger
$22.95
Not on our shelves at the moment, but we will order it for you.

The Psychic Vampire Codex is the first book to examine the phenomenon and experience of modern vampirism completely from the vampire's perspective. Father Sebastiaan, a fellow vampire writes in the foreword that Michelle Belanger's system "introduced a breath of fresh air into the vampire subculture. It freed us to look at ourselves in a new light, and it also helped those outside our community to view us differently. No longer were we parasites or predators . . . we could use our inborn abilities to help people heal." Psychic vampires are people who prey on the vital, human life energies of others. They are not believed to be undead. They are mortal people whose need for energy metaphorically connects them to the lifestealing predators of vampire myth.

In The Psychic Vampire Codex, Michelle Belanger, author and psychic vampire, introduces readers to the fascinating system of energy work used by vampires themselves and provides the actual codex text widely used by the vampire community for instruction in feeding and other techniques. Belanger also examines the ethics of vampirism and offers readers methods of protection from vampires.

The Psychic Vampire Codex explodes all preconceptions and myths about who and what psychic vampires really are and reveals a vital and profound spiritual tradition based on balance, rebirth, and an integral relationship with the spirit world.

Michelle Belanger discovered her psychic abilities at an early age, and her affinity with psychic vampirism while in high school. She has been deeply and centrally involved in the vampire community since the early 1990s, working with many vampire luminaries as a vital part of House Kheperu. She edited and published the Gothic literary magazine Shadowdance. Belanger is a member of the Goth band URN, which performs widely in the Midwest. Belanger lives in Brunswick, Ohio.

"I've always loved books that give me useful and dynamic information that I can use in my personal growth and development, and The Psychic Vampire Codex is one of these books." Larry Dreller, author of Beginner's Guide to Mediumship
— Reviews