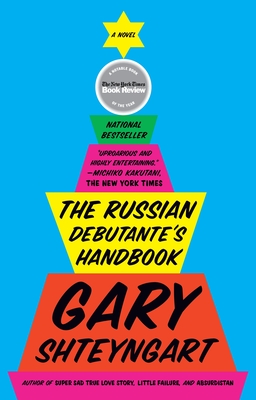 The Russian Debutante's Handbook introduces Vladimir Girshkin, one of the most original and unlikely heroes of recent times. The twenty-five-year-old unhappy lover to a fat dungeon mistress, affectionately nicknamed "Little Failure" by his high-achieving mother, Vladimir toils his days away as a lowly clerk at the bureaucratic Emma Lazarus Immigrant Absorption Society. When a wealthy but psychotic old Russian war hero appears, Vladimir embarks on an adventure of unrelenting lunacy that takes us from New York's Lower East Side to the hip frontier wilderness of Prava--the Eastern European Paris of the nineties. With the help of a murderous but fun-loving Russian mafioso, Vladimir infiltrates the Prava expat community and launches a scheme as ridiculous as it is brilliant.

Bursting with wit, humor, and rare insight, The Russian Debutante's Handbook is both a highly imaginative romp and a serious exploration of what it means to be an immigrant in America.
Gary Shteyngart is the New York Times bestselling author of the memoir Little Failure (a National Book Critics Circle Award finalist) and the novels Super Sad True Love Story (winner of the Bollinger Everyman Wodehouse Prize), Absurdistan, and The Russian Debutante’s Handbook (winner of the Stephen Crane Award for First Fiction and the National Jewish Book Award for Fiction). His books regularly appear on best-of lists around the world and have been published in thirty countries.

"As attuned to the exhilarating possibilities of the language as Martin Amis, as deadpan and funny as the young Evelyn Waugh."—Michiko Kakutani, The New York Times

"In Vladimir Girshkin, the wisecracking, lovelorn, desperately self-reinventing protagonist, Shteyngart has given us a literary symbol for this new immigrant age, much as Saul Bellow or Henry Roth did in theirs..."—Chris Lehmann, The Washington Post

"A brilliant, funny debut describing the vicissitudes of immigration today, as experienced by the hero, a young Russian-American."—Harper's Bazaar

"The rampaging narrative is festooned on every page with glittering one-liners, improbably apt similes, and other miniature pleasures."—Elle

"If Henry Miller were Russian, this is a book he might have written."—Time Out New York