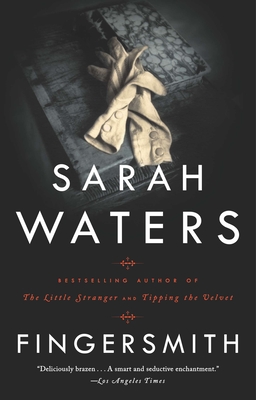 Psychological heists and Victorian lesbians: what more do you need? Great characters, great story, great writing. Choosing only one favorite Sarah Waters book is sinful, but this would have to be mine.

“Oliver Twist with a twist…Waters spins an absorbing tale that withholds as much as it discloses. A pulsating story.”—The New York Times Book Review

The Handmaiden, a film adaptation of Fingersmith, directed by Park Chan-wook and starring Kim Tae-Ri, is now available.

Sue Trinder is an orphan, left as an infant in the care of Mrs. Sucksby, a "baby farmer," who raised her with unusual tenderness, as if Sue were her own. Mrs. Sucksby’s household, with its fussy babies calmed with doses of gin, also hosts a transient family of petty thieves—fingersmiths—for whom this house in the heart of a mean London slum is home.

One day, the most beloved thief of all arrives—Gentleman, an elegant con man, who carries with him an enticing proposition for Sue: If she wins a position as the maid to Maud Lilly, a naïve gentlewoman, and aids Gentleman in her seduction, then they will all share in Maud’s vast inheritance. Once the inheritance is secured, Maud will be disposed of—passed off as mad, and made to live out the rest of her days in a lunatic asylum.

With dreams of paying back the kindness of her adopted family, Sue agrees to the plan. Once in, however, Sue begins to pity her helpless mark and care for Maud Lilly in unexpected ways...But no one and nothing is as it seems in this Dickensian novel of thrills and reversals.

Sarah Waters is the New York Times–bestselling author of The Paying Guests, The Little Stranger,The Night Watch, Fingersmith, Affinity, and Tipping the Velvet. She has three times been short-listed for the Man Booker Prize, has twice been a finalist for the Orange Prize, and was named one of Granta’s best young British novelists, among other distinctions. Waters lives in London.

“Oliver Twist with a twist…Waters spins an absorbing tale that withholds as much as it discloses. A pulsating story.”
—The New York Times Book Review

“Superb storytelling. Fingersmith is gripping; so suspenseful and twisting is the plot that for the last 250 pages, I read at breakneck speed.”
—USA Today

“A marvelous pleasure…Waters’s noted attention to historical detail and her beautifully sensitive dialogue help to anchor the force-five plot twisters.”
—The Washington Post

“Calls to mind the feverishly gloomy haunts of Charlotte and Emily Brontë…Elaborate and satisfying.”
—The Seattle Times

“A sweeping read.”
—The Boston Globe