The Western Canon: The Books and School of the Ages (Paperback) 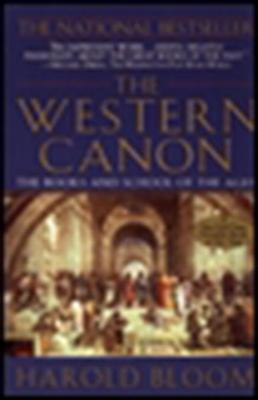 The Western Canon: The Books and School of the Ages (Paperback)

“Heroically brave, formidably learned… The Western Canon is a passionate demonstration of why some writers have triumphantly escaped the oblivion in which time buries almost all human effort. It inspires hope… that what humanity has long cherished, posterity will also.” –The New York Times Book Review

Literary critic Harold Bloom's The Western Canon is more than a required reading list -- it is a vision. Infused with a love of learning, compelling in its arguments for a unifying written culture, it argues brilliantly against the politicization of literature and presents a guide to the great works of the western literary tradition and essential writers of the ages: the "Western Canon." Harold Bloom's book, much-discussed and praised in publications as diverse as The Economist and Entertainment Weekly, offers a dazzling display of erudition mixed with passion. For years to come it will serve as an inspiration to return to the joys of reading our literary tradition offers us.
Harold Bloom is a Sterling Professor of Humanities at Yale University and a former Charles Eliot Norton Professor at Harvard. As The Paris Review has pointed out, "no critic in the English language since Samuel Johnson has been more prolific." His more than thirty books include The Best Poems of the English Language, The Art of Reading Poetry, and The Book of J. He is a MacArthur Prize Fellow, a member of the American Academy of Arts and Letters, and the recipient of many awards and honorary degrees, including the Academy's Gold Medal for Belles Lettres and Criticism, the International Prize of Catalonia, and the Alfonso Reyes Prize of Mexico.

Alfred Kazin has said, "Bloom is all literature, (he) positively lives it," and The New York Times called him "the most original literary critic in America." He lives in New Haven and New York.

“Heroically brave, formidably learned… The Western Canon is a passionate demonstration of why some writers have triumphantly escaped the oblivion in which time buries almost all human effort. It inspires hope… that what humanity has long cherished, posterity will also.” –The New York Times Book Review

“Harold Bloom’s large-minded and large-hearted book about the great books has many of the virtues that it sees and shows in the works he so fiercely admires.” –Christopher Ricks, The Washington Times

“The list… is what will get all the attention, but it is the text preceding that provides the true pleasure.” –Entertainment Weekly

“[Harold Bloom] has, in a quietly joyous fashion, the chutzpah to put his stamp on the whole of literature from Genesis to Ashbery, rivaling the scope of hero-critics like Sainsbury or Curtius or Auerbach though more giddily adventurous than they were… In one sense the hero of this book, as of all his books, is Bloom himself, modestly bold, genially polemical, dogmatically opposed to dogma, carrying to much in his head and always ready to say what he thinks about it all.” –Frank Kermode, The London Review of Books