For Joshua: An Ojibwe Father Teaches His Son (Hardcover) 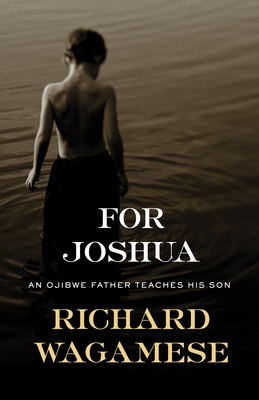 Wagamese had such a gift for writing with a strong and ever present force about the challenges and failings in his life. At the same time, his introspections are never without hope. Another wonderful memoir! - randy's June Staff Pick, 2020

"We may not relight the fires that used to burn in our villages, but we can carry the embers from those fires in our hearts and learn to light new fires in a new world." Ojibwe tradition calls for fathers to walk their children through the world, sharing the ancient understanding "that we are all, animate and inanimate alike, living on the one pure breath with which the Creator gave life to the Universe." In this intimate series of letters to the six-year-old son from whom he was estranged, Richard Wagamese fulfills this traditional duty with grace and humility, describing his own path through life--separation from his family as a boy, substance abuse, incarceration, and ultimately the discovery of books and writing--and braiding this extraordinary story with the teachings of his people, in which animals were the teachers of human beings, until greed and a desire to control the more-than-human world led to anger, fear, and, eventually, profound alienation. At once a deeply moving memoir and a fascinating elucidation of a rich indigenous cosmology, For Joshua is an unforgettable journey.

Richard Wagamese (1955-2017) was one of Canada's foremost writers, and one of the leading indigenous writers in North America. The author of several acclaimed memoirs and more than a dozen novels, he won numerous awards and honors for his writing.