Easy to Learn, Difficult to Master: Pong, Atari, and the Dawn of the Video Game (Paperback) 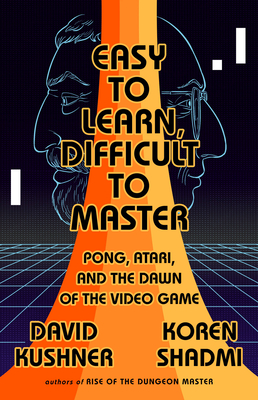 Easy to Learn, Difficult to Master: Pong, Atari, and the Dawn of the Video Game (Paperback)

The gripping origin story of Pong, Atari, and the digital icons who defined the world of video games.

A deep, nostalgic dive into the advent of gaming, Easy to Learn, Difficult to Master returns us to the emerging culture of Silicon Valley. At the center of this graphic history, dynamically drawn in colors inspired by old computer screens, is the epic feud that raged between Atari founder Nolan Bushnell and inventor Ralph Baer for the title of “father of the video game.”

While Baer, a Jewish immigrant whose family fled Germany for America, developed the first TV video-game console and ping-pong game in the 1960s, Bushnell, a self-taught whiz kid from Utah, put out Atari’s pioneering table-tennis arcade game, Pong, in 1972. Thus, a prolonged battle began over who truly spearheaded the multibillion-dollar gaming industry, and around it a sweeping narrative about invention, inspiration, and the seeds of digital revolution.

David Kushner is an award-winning journalist and author who has written eight books and two nonfiction graphic novels. A contributing editor for Rolling Stone and Outside, Kushner has written for publications including The New Yorker, Vanity Fair, Wired, The New York Times Magazine, New York, and GQ. His work is featured in several “best of” anthologies. Many of his articles and books are being adapted for TV and film and he has taught as a Ferris Professor of Journalism at Princeton University, and an adjunct professor of journalism at New York University.

Koren Shadmi is a Brooklyn-based illustrator and cartoonist. He studied illustration in the School of Visual Arts in NYC, where he now teaches. Koren's graphic novels have been published in France, Germany, Italy, Spain, Israel, Korea, and the US.


“This little book offers for the story of Pong what the coin-op did for games: the most dense, lucid, and delightful version of itself.”—Ian Bogost, game designer and author of PLAY ANYTHING

“Easy to Learn, Difficult to Master tells the fascinating story of a network of entrepreneurs who created a universe of video games—from Pong to Atari and beyond—that reshaped modern times. This gripping graphic novel unearths a forgotten and bizarre history that produced a multi-billion-dollar industry. A great book for anyone interested in video games, or the history of contemporary times.”—Julian Zelizer, author of BURNING DOWN THE HOUSE

“Easy to Learn, Difficult to Master brilliantly depicts the epic story behind video games, between two very different inventors who changed the world with virtual paddles. If this book were an arcade game, I’d lose all my quarters replaying it.”

—Steven Levy, author of HACKERS and FACEBOOK: THE INSIDE STORY

“[A]n insightful biography into the genesis of video games as we know them.” —Gizmodo

“In Easy to Learn, Difficult to Master, readers see the contested history of the rise of video games, specifically in the development of Pong… The beginnings of Silicon Valley culture are on display, and the authors smartly balance the highs and lows that continue in video-game-company culture to this day. The history is interspersed with a fun, Tron-esque game of Pong between Bushnell and Baer, and the artwork captures the old-school-gaming feel.”—Booklist