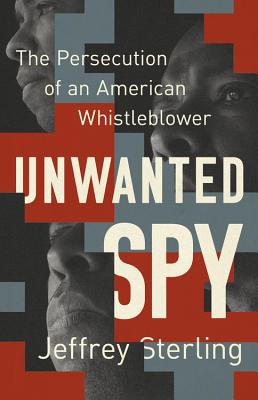 
Ships quickly (1-7 days)
The powerful story of a CIA whistleblower and political prisoner who refused to give up on his American dream
In 2015, Jeffrey Sterling was sentenced to prison, convicted of violating the Espionage Act. Sterling, it is now clear, was another victim of our government's draconian crackdown on alleged leakers and whistleblowers.
Sterling grew up in a small, segregated town in Missouri and jumped at the chance to broaden his world and serve his country, first in law school and later in the CIA. After an impressive career, Sterling's progress came to a sudden halt: he was denied opportunities because of his race and was pushed out of the Agency. Later, Sterling courageously blew the whistle on the CIA's botched covert operation in Iran to Senate investigators. After a few quiet years in Missouri with his wife, he was arrested suddenly and charged with espionage.
Unwanted Spy is an inspiring account of one man's uncompromising commitment to the truth and a reminder of the principles of justice and integrity that should define America.
Jeffrey Sterling is a lawyer and former CIA case officer who was convicted of violating the Espionage Act and was in federal prison in Colorado. Before his trial and conviction, Sterling worked at the CIA, including for the Iran task force, for nearly a decade. He studied political science at Millikin University and holds a law degree from the Washington University School of Law in St. Louis. He was released from prison in January 2018.
"A book that amply demonstrates grave flaws in the criminal justice system."—Kirkus Reviews

"Americans owe a debt to Jeffrey Sterling, who told the truth and endured imprisonment for us. His story is a powerful tale of integrity and bravery and the price a decent American paid for defending the values enshrined in the Bill of Rights. Make your children read it and learn."—Charles Glass, former ABC News Chief Middle East Correspondent and author of They Fought Alone: The True Story of the Starr Brothers, British Secret Agents in Nazi-Occupied France

"Unwanted Spy is at the same time an American tragedy and a first-person account of how to live an upstanding life against daunting odds. Jeffrey Sterling is a patriot. He is also one of the most courageous and underappreciated whistleblowers in contemporary America. We all want to believe the best about our country, our government, and our society. But the truth is sometimes ugly. And sometimes patriots are harmed by that ugliness. Jeffrey Sterling was vilified by our government because he wouldn't toe the line. He paid for his conscientiousness with his freedom. Unwanted Spy makes it clear, though, that he was right and 'they' were wrong. He's the better man for it."—John Kiriakou, former CIA counterterrorismofficer and senior investigator for the Senate Foreign Relations Committee