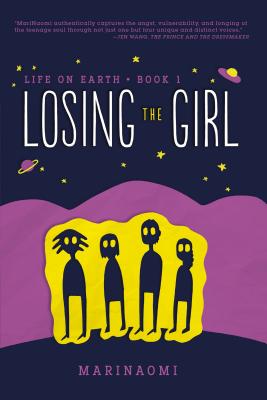 It's hard to describe exactly what's going on in Losing the Girl. There are some odd things, to be sure: The sudden and complete disappearance of a 14-year-old prodigy, the loss of everyone's cell phone reception. But the suburban teens at the heart of this story barely take note of these events as they deal with their much more traditional interpersonal relationships and difficult decisions. I'm sure the background attractions are building to something spectacular, but for now I'm content to soak in the vivid atmosphere as the characters connect to and detach from one another, adrift in manner akin to MariNaomi's constantly shifting art styles. It's been a long time since I've been this excited for a sequel.

Claudia Jones is missing. Her classmates are thinking the worst . . . or at least the weirdest. It couldn't be an alien abduction, right?

None of Claudia's classmates at Blithedale High know why she vanished--and they're dealing with their own issues. Emily's trying to handle a life-changing surprise. Paula's hoping to step out of Emily's shadow. Nigel just wants to meet a girl who will laugh at his jokes. And Brett hardly lets himself get close to anybody.

In Losing the Girl, the first book in the Life on Earth trilogy, Eisner-nominated cartoonist MariNaomi looks at life through the eyes of four suburban teenagers: early romance, fraying friendships, and the traces of a mysterious--maybe otherworldly--disappearance. Different chapters focus on different characters, each with a unique visual approach.