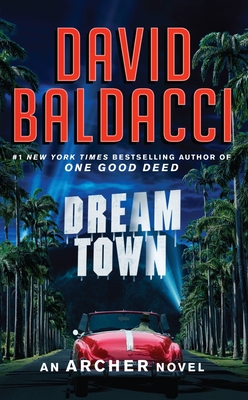 Private investigator and World War II veteran Aloysius Archer heads to Los Angeles, the city where dreams are made and shattered, and is ensnared in a lethal case in this latest thriller in #1 New York Times bestselling author David Baldacci’s Nero Award-winning series.

It’s the eve of 1953, and Aloysius Archer is in Los Angeles to ring in the New Year with an old friend, aspiring actress Liberty Callahan, when their evening is interrupted by an acquaintance of Callahan’s: Eleanor Lamb, a screenwriter in dire straits.

After a series of increasingly chilling events—mysterious phone calls, the same blue car loitering outside her house, and a bloody knife left in her sink—Eleanor fears that her life is in danger, and she wants to hire Archer to look into the matter. Archer suspects that Eleanor knows more than she’s saying, but before he can officially take on her case, a dead body turns up inside of Eleanor’s home . . . and Eleanor herself disappears.

Missing client or not, Archer is dead set on finding both the murderer and Eleanor. With the help of Callahan and his partner Willie Dash, he launches an investigation that will take him from mob-ridden Las Vegas to the glamorous world of Hollywood to the darkest corners of Los Angeles—a city in which beautiful faces are attached to cutthroat schemers, where the cops can be more corrupt than the criminals . . . and where the powerful people responsible for his client’s disappearance will kill without a moment’s hesitation if they catch Archer on their trail.

DAVID BALDACCI is a global #1 bestselling author, and one of the world's favorite storytellers. His books are published in over forty-five languages and in more than eighty countries, with 150 million copies sold worldwide. His works have been adapted for both feature film and television. David Baldacci is also the cofounder, along with his wife, of the Wish You Well Foundation, a nonprofit organization dedicated to supporting literacy efforts across America. Still a resident of his native Virginia, he invites you to visit him at DavidBaldacci.com and his foundation at WishYouWellFoundation.org.

"Baldacci paints a vivid picture of the not-so-distant era . . . The 1950s weren’t the fabled good old days, but they’re fodder for gritty crime stories of high ideals and lowlifes, of longing and disappointment, and all the trouble a PI can handle. Well-done crime fiction. Baldacci nails the noir."—Kirkus, Starred Review

"In the Archer series, [Baldacci] proves to be a natural at handling the postwar setting. Baldacci’s fans should be lining up for [Dream Town].”—Booklist

“Like his protagonist, Baldacci has a passion for details, especially those of the social variety. After a few pages you will feel as if you have time-traveled back to that era.”—Florida Times-Union

"If you like a whodunit with a complex plot and characters, you are going to love Dream Town. Baldacci’s take on Hollywood in the fifties is quite refreshing and a great part of this mystery novel’s charm."—TheMysterySite.com

"One of [Baldacci's] finest books. Great character, great story, great portrait of an era."—Bill Clinton (praise for One Good Deed)

“This was already my favorite of Baldacci's recurring series, and "Dream Town" only reinforces that, in large part because of Baldacci's brilliance in stitching his story across a tapestry of a bygone era of movie magic with a dark side. Nostalgia aside, this is storytelling of the highest order, rich in character and bursting with story.”—Providence Journal