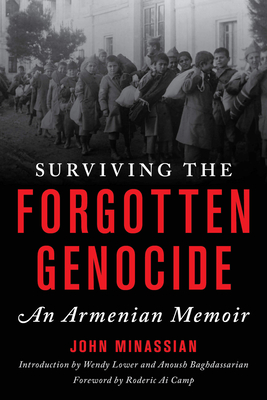 A rare and poignant testimony of a survivor of the Armenian genocide. The twentieth century was an era of genocide, which started with the Turkish destruction of more than one million Armenian men, women, and children--a modern process of total, violent erasure that began in 1895 and exploded under the cover of the First World War. John Minassian lived through this as a young man, witnessing the murder of his kin, concealing his identity as an orphan and laborer in Syria, and eventually immigrating to the United States to start his life anew. A rare testimony of a survivor of the Armenian genocide, one of just a handful of accounts in English, Minassian's memoir is breathtaking in its vivid portraits of Armenian life and culture and poignant in its sensitive recollections of the many people who harmed and helped him. As well as a searing testimony, his memoir documents the wartime policies and behavior of Ottoman officials and their collaborators; the roles played by foreign armies and American missionaries; and the ultimate collapse of the empire. The author's journey, and his powerful story of perseverance, despair, and survival, will resonate with readers today.

John Minassian, a young man when the Armenian genocide occurred, was one of only two survivors in his family. He ultimately was able to immigrate to the United States, where he lived until his death in 1991. His grandson, Roderic Ai Camp, is McKenna Professor of the Pacific Rim at Claremont McKenna College. His books include The Metamorphosis of Leadership in a Democratic Mexico. Wendy Lower, co-author of the introduction, is director of the Mgrublian Center for Human Rights, John K. Roth Professor of History, and George R. Roberts Fellow at Claremont McKenna College. Her book Hitler's Furies: German Women in the Nazi Killing Fields was a National Book Award finalist. Anoush Baghdassarian, coauthor of the introduction, completed her BA at Claremont McKenna College and MA from Columbia University in Human Rights Studies. She is enrolled at Harvard Law School focusing on international criminal law, and she is the author of Found, a play that honors the history of those who suffered in the Turkish genocide of the Armenians.