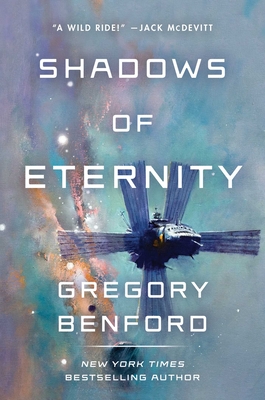 Benford is one of the best and this novel demonstrates that. After centuries of searching, humanity finds the voices from other civilizations it always knew were there, and the universe is opened up. Rachel, aspiring Librarian, finds the keys to joining that vast community--with amazing results.
— From Mark
“A fascinating plunge into a new world. I loved the idea of the SETI Library on the moon. Chasing wormholes is also a wild ride!” —Jack McDevitt, bestselling author of Octavia Gone

Shadows of Eternity is legendary author Gregory Benford’s return to interstellar science fiction as a discovery within the SETI library on the moon turns out to be deadly.

Shadows of Eternity is a novel set two centuries from now. Humanity has established a SETI library on the moon to decipher and interpret the many messages from alien societies we have discovered. The most intriguing messages are from complete artificial intelligences.

Ruth, a beginner Librarian, must talk to alien minds—who have aggressive agendas of their own. She opens doors into strangeness beyond imagination—and in her quest for understanding nearly gets killed doing it.

Gregory Benford is one of science fiction’s iconic writers, having been nominated for four Hugo Awards and twelve Nebula Awards. Shadows of Eternity marks Gregory Benford’s return to the sweeping galactic science fiction that readers have been waiting for.
Gregory Benford is a physicist, educator, and author. He received a BS from the University of Oklahoma and a PhD from the University of California, San Diego. Benford is a professor of physics at the University of California, Irvine, where he has been a faculty member since 1971. He is a Woodrow Wilson Fellow and a Visiting Fellow at Cambridge University. He has served as an advisor to the Department of Energy, NASA, and the White House Council on Space Policy. He is the author of over twenty novels, including In the Ocean of the Night, The Heart of the Comet (with David Brin), Foundation’s Fear, Bowl of Heaven (with Larry Niven), Timescape, and The Berlin Project. A two-time winner of the Nebula Award, Benford has also won the John W. Campbell Award, the British Science Fiction Award (BSFA), the Australian Ditmar Award, and the 1990 United Nations Medal in Literature. In 1995 he received the Lord Foundation Award for contributions to science and the public comprehension of it. He has served as scientific consultant to the NHK Network and for Star Trek: The Next Generation.