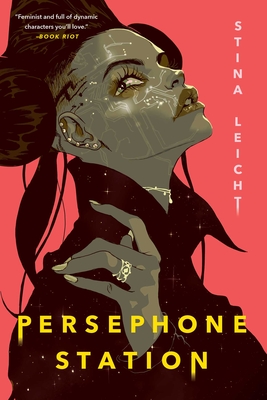 The Seven Samurai meet The Expanse. Great characters, a noble cause, good writing, and some terrific subversiveness. Recommended.
— From Mark
Hugo Award–nominated author Stina Leicht has created a “thoroughly enjoyable” (NPR) take on space opera for fans of The Mandalorian and Cowboy Bebop in this high-stakes adventure.

Persephone Station, a seemingly backwater planet that has been largely ignored by the United Republic of Worlds, becomes the focus for the Serrao-Orlov Corporation as the planet has a few secrets the corporation tenaciously wants to exploit.

Rosie—owner of Monk’s Bar, in the corporate town of West Brynner, caters to wannabe criminals and rich Earther tourists, of a sort, at the front bar. However, exactly two types of people drank at Monk’s bar: members of a rather exclusive criminal class and those who sought to employ them.

Angel—ex-marine and head of a semi-organized band of beneficent criminals, wayward assassins, and washed-up mercenaries with a penchant for doing the honorable thing is asked to perform a job for Rosie. What this job reveals will affect Persephone and put Angel and her squad up against an army. Despite the odds, they are rearing for a fight with the Serrao-Orlove Corporation. For Angel, she knows that once honor is lost, there is no regaining it. That doesn’t mean she can’t damned well try.
Stina Leicht is a science fiction and fantasy writer living in central Texas. Her second novel, And Blue Skies from Pain, was on the Locus Recommended Reading list for 2012. She was an Astounding Award for Best New Writer finalist in 2011 and in 2012. In 2011 she was also shortlisted for the Crawford Award. She is also the author of Loki’s Ring.

"This is a military sci-fi up there with Joe Haldeman or Iain M Banks with excellent world building and a Le Guin/Anne Leckie scalpel for interrogating old tropes. The vibe is Casablanca meets The Magnificent Seven meets The Mandalorian and if that doesn’t intrigue you you may want to check your pulse."—Adrian McKinty, New York Times bestselling author of The Chain

“This enjoyable and thrilling read features excellent worldbuilding and lively characterizations. The engaging crew and well-drawn plot will have readers hoping this will become a series.”
— Library Journal

“In this earnest space opera, an ensemble of badass women and nonbinary and queer characters fight corporate overlords on the semilawless planet Persephone... [Rosie’s] gender-fluid nonbinariness is just one part of a delightfully complex, genuine, and amoral character who could make this novel worth your time.”
— Kirkus Reviews