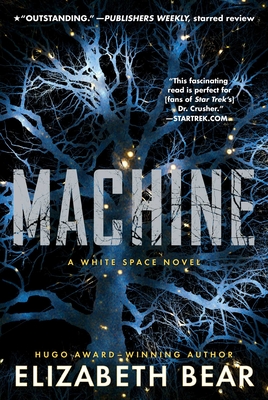 Crafty, part homage to Golden Age science fiction, but through a modern, savvy eye. Medical SF is rare---handled this well, it is very special. Part of a series of related novels, Bear delivers a story as good as Leckie, Cherryh, a handful of others.

— From Mark
In this “spectacularly smart space opera” (Publishers Weekly, starred review) set in the same universe as the critically acclaimed White Space series and perfect for fans of Karen Traviss and Ada Hoffman, a space station begins to unravel when a routine search and rescue mission returns after going dangerously awry.

She hasn’t had a decent cup of coffee in fifteen years. Her workday begins when she jumps out of perfectly good space ships and continues with developing treatments for sick alien species she’s never seen before. She loves her life. Even without the coffee.

But Dr. Jens is about to discover an astonishing mystery: two ships, once ancient and one new, locked in a deadly embrace. The crew is suffering from an unknown ailment and the shipmind is trapped in an inadequate body, much of her memory pared away.

Unfortunately, Dr. Jens can’t resist a mystery and she begins doing some digging. She has no idea that she’s about to discover horrifying and life-changing truths.

Written in Elizabeth Bear’s signature “rollicking, suspenseful, and sentimental” (Publishers Weekly) style, Machine is a fresh and electrifying space opera that you won’t be able to put down.
Elizabeth Bear won the John W. Campbell award for Best New Writer in 2005 and has since published fifteen novels and numerous short stories. She writes in both the science fiction and fantasy genres and has won critical acclaim in both. She has won the Hugo Award more than once. She lives in Massachusetts. Visit her on Twitter @Matociquala.

“A page-turning fusion of science fiction and mystery.”—Kirkus

“Elizabeth Bear tells a fun tale set in a Woke utopia filled with strange aliens and moral problems relating to a special ward that helps fund the hospital.”—University City Review

"Elizabeth Bear has simply learned from the best and added her own spin to create a unique universe."—Amazing Stories