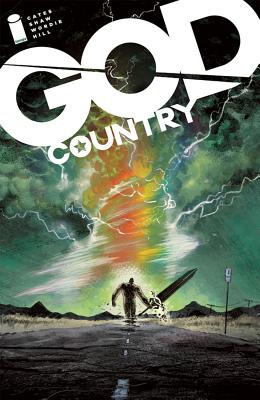 Described as Southern Bastards meets American Gods, I was hooked. I think the story of an old man acquiring this weapon to help him and also endanger him tells a lot about the choices that one must make. The story is the driving force with plenty of action and plenty of mythology. I really enjoyed spending time with these characters.

SOUTHERN BASTARDS meets American Gods in a high-stakes fantasy series that masterfully blends high-octane action and jaw-dropping worldbuilding. In GOD COUNTRY, readers meet Emmett Quinlan, an old widower rattled by dementia. Emmett isn't just a problem for his children--his violent outbursts are more than the local cops can handle. When a tornado levels his home--as well as the surrounding West Texas town--a restored Quinlan rises from the wreckage. An enchanted sword at the eye of the storm gives him more than a sound mind and body, however. He's now the only man who can face these otherworldly creatures the sword has drawn down to the Lone Star State... In GOD COUNTRY salvation is a double-edged sword.