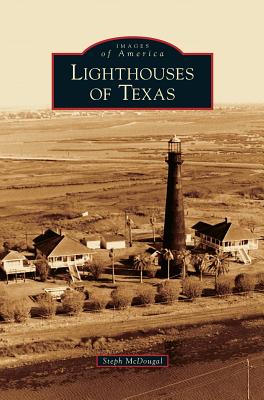 By Steph McDougal
$31.99
Not on our shelves at the moment, but we will order it for you.
(This book cannot be returned.)

Not long after winning their independence from Mexico in 1836, Texans began clamoring for lighthouses. Hundreds of miles of barrier islands, shifting sandbars, and shallow bays made the Texas coast treacherous at a time when few overland routes provided access to the new republic. Beginning in 1852, twenty-eight lighthouses were built along the Texas coastline, on land and over water. Lighthouse service was often a family affair, with husbands, wives, and children working together as keepers and assistants. For nearly 70 years, construction continued as coastal erosion, hurricanes, and wars regularly damaged or destroyed those lighthouses already built. These "sentinels of the sea" lessened but did not eliminate the chance of shipwreck, so lifesaving stations, manned by able seamen with unsinkable surfboats, were established as well. As Texas's lighthouses were gradually automated throughout the 20th century, many were sold to private owners or abandoned. Today, several have been restored, and two--at Aransas Pass and Port Isabel--still function as aids to navigation.