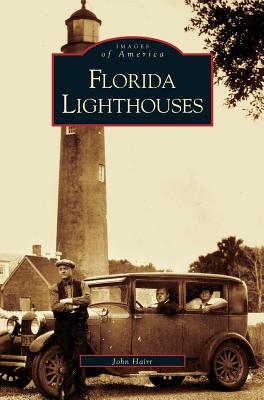 By John Hairr
$31.99
Not on our shelves at the moment, but we will order it for you.
(This book cannot be returned.)

Sporting the second-longest coastline in the United States, Florida has over 8,000 miles of sparkling beaches and waterfront property. This valuable
landscape and the region's position between the Atlantic Ocean and the Gulf of Mexico made Florida key in the early expansion of American trade routes, but the state's several capes and dangerous reefs, rocks, and shoals made travel quite perilous to unwary mariners. When commerce and traffic began to grow between ports on the East Coast and along the Gulf of Mexico in the nineteenth century, it became necessary to construct aids to navigation along the state's long and treacherous coast. Lighthouses were the solution. Constructed in a variety of styles and sizes, Florida's lighthouses were erected on what, at the time, were some of the most desolate regions of the southeastern United States and included lonely offshore islands. Manned and inhabited by vigilant keepers and their families, these towers illuminated the dark seas and provided the beacon that guided lost travelers. Large brick structures watched over St. Augustine, Pensacola, and Ponce de Leon Inlet; iron skeletons towered over Crooked River and Hillsboro Inlet; and screwpile lighthouses stood as sentinels in the waters off the Florida Keys.