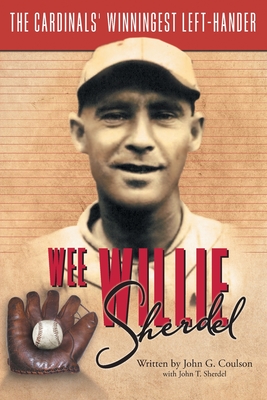 Wee Willie Sherdel was a very humble, courageous left-handed pitcher who became one of the all-time great southpaws in St. Louis Cardinals history. The son of a German blacksmith in a small Pennsylvania village, Willie's dream was to become a major league pitcher - a rather big dream for a small boy. Not the most talented or biggest, he worked hard and learned from greats like Eddie Plank, Branch Rickey and Grover Cleveland Alexander. Sherdel's best years were in the 1920s while Rickey was developing the farm system concept and the Cards were playing in two World Series. Known for his slow ball, Willie was given the honor of pitching the first game against Babe Ruth, Lou Gehrig and the powerful Yankees in both Series.

Although labeled a hard-luck pitcher in the Series, Sherdel performed many great feats on the diamond. Since his retirement in 1932, he remains the Redbirds' winningest left-hander and fifth all-time winner. Willie also has pitched the third-most games and the fourth-most innings. Like all pitchers, he loved to talk about his hitting. Among Cardinals' pitchers, Sherdel owns the fourth-most career home runs and the fifth-best batting average for his .337 in 1923.

His contemporaries included over 90 Hall of Famers and some of the greatest players of all-time including Ruth, Gehrig, Ty Cobb and Rogers Hornsby....