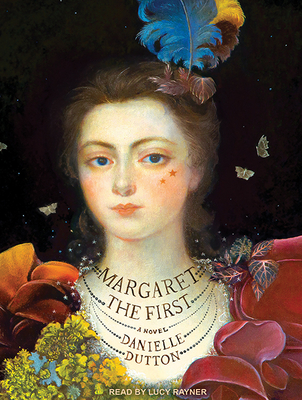 By Danielle Dutton, Lucy Rayner (Narrated by)
Email or call for price.
Hard to Find

Typically, I stay away from historical fiction unless it's about the 20th century. I'm very happy I overcame my bias. Margaret Cavendish was shy, a bit insecure, loyal, creative, brave and many more wonderful things. Dutton's prose is beautiful and I fully enjoyed the creative way she tells Mad Marge's story. A definitive recommend. -Randy's March Staff Pick, 2016

The entire period both just before, during, and just after the Enlightenment was filled with individuals seemingly larger than life, robustly engaged in challenging any preconception they could find, hunting them down, nailing them to a board, dissecting them, and flinging their conclusions in the face of any convention that presumed to deny them agency. Margaret, Duchess of Newcastle, was an eccentric, brilliant woman who challenged a convention further. First woman to be invited to address the infant Royal Society, before men like Boyle and Pepys, she fought against an inborn reticence to make herself more than society insisted she should be. She wrote, she made her own clothes, she presented audaciously, upsetting apple carts and collecting admirers and champions, producing plays and books, including one proto-science fiction novel. She styled herself Margaret the First. The full flavor of the period and her place in it---and against it---is on display in Danielle Dutton's marvelous novel. -Mark's March Staff Pick, 2016

Typically, I stay away from historical fiction unless it's about the 20th century. I'm very happy I overcame my bias. Margaret Cavendish was shy, a bit insecure, loyal, creative, brave and many more wonderful things. Dutton's prose is beautiful and I fully enjoyed the creative way she tells Mad Marge's story. A definitive recommend.

17th century author Margaret Cavendish was one of the first in many ways--one of the first women to publish under her own name, one of the first writers of what we, today, identify as science fiction, one of our earliest women philosophers and naturalists and playwrights whose work has surived to present day. But in this novelization of her life, Danielle Dutton reaches beyond Cavendish’s dazzling biography to create an extraordinary inner landscape, every bit as original on a molecular level as her historical legacy has become. Slim but overflowing with keen insight and lush strangeness, you will want to live in Cavendish’s head for longer than this novel’s pages--and the quietly subversive questions it asks  will stay with you long after it’s done. -Kea's March Staff Pick, 2016

“Dutton's novel takes the already extraordinary life of Margaret Cavendish - 17th century natural philosopher, author of The Blazing World, and Duchess of Newcastle -- and transforms it into a stunning work of historical fiction. With women in the sciences a hot issue today, Margaret the First satisfies a craving for women's writing, women's voices, and women's stories, painting a portrait of a sensitive, thoughtful woman hungry not just for praise and recognition, but acknowledgment, affirmation, and validation. Margaret the First is a triumph!”
— Liz Wright (W), Brazos Bookstore, Houston, TX

Margaret the First dramatizes the life of Margaret Cavendish, the shy, gifted, and wildly unconventional seventeenth-century duchess. The eccentric Margaret wrote and published volumes of poems, philosophy, feminist plays, and utopian science fiction at a time when "being a writer" was not an option open to women. As one of the Queen's attendants and the daughter of prominent Royalists, she was exiled to France when King Charles I was overthrown. As the English Civil War raged on, Margaret met and married William Cavendish, who encouraged her writing and her desire for a career. After the War, her work earned her both fame and infamy in England; at the dawn of daily newspapers, she was "Mad Madge," an original tabloid celebrity. Yet Margaret was also the first woman to be invited to the Royal Society of London-a mainstay of the Scientific Revolution-and the last for another two hundred years. Margaret the First is very much a contemporary novel set in the past. Written with lucid precision and sharp cuts through narrative time, it is a gorgeous and wholly new approach to imagining the life of a historical woman.