More Sailboat Projects: Clever Ideas and How to Make Them - For a Pittance (Paperback) 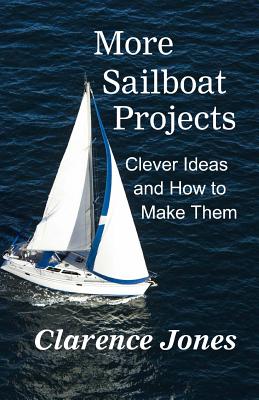 This book is a sequel to Sailboat Projects, first published as an e-book in 2012 and as a printed book in 2013. Author Clarence Jones has been a sailor most of his life. Much of his pleasure in sailing has been creating projects for his boats that enhanced their performance or made them easier to sail. More fun. He writes. He invents. He tinkers. He sails. That's what this book is all about. Each chapter is a project that shows you how to make upgrades and gadgets for a sailboat.. His specialty is making something for $10 that would cost $200 at a boating store. Jones has produced several books and many how-to pieces in newspapers and magazines. His guidelines for these DIY projects - and writing about them - have always been: > Simplicity > Ease of assembly > Minimal cost > Lots of pictures > Readily available materials. The projects in this book vary from very simple (Swaging Rope to Make an Eye, Anchor Retriever) to fairly complex (New Holding Tank Vent to Avoid a Brown Disaster, Wide-Screen Weather Station, AIS and Live TV). Some of them were previously published (or soon will be) in Good Old Boat magazine. There are 18 projects here. Somewhere in there, other sailors will discover lots of ideas to improve their boat and their sailing experience. Welcome aboard.

Clarence Jones has always been a writer/mechanic/inventor/tinkerer. He started a school newspaper when he was in the third grade, and built a darkroom in the family bathroom two years later. He worked full-time as a daily newspaper reporter while he earned his degree at the University of Florida Journalism School.. His inventive and tinkering skills helped him hide audio recorders and cameras that were some of his investigative tools as a reporter for 30 years in both newspapers and television. His graduate degree as a craftsman was earned when he spent four years building a house on the Gulf of Mexico in the Florida Keys. He published the memoirs of his 30-year reporting career in 2012 - They're Gonna Murder You - War Stories From My Life At the News Front. The title comes from his friends' constant warning. His specialties were organized crime, dope smugglers, dirty cops and crooked politicians. Altogether, he was a newspaper reporter for 16 years at the Florida Times-Union, Jacksonville Journal and Miami Herald. Between the Jacksonville newspapers and the Herald, he was a Nieman Fellow at Harvard University for a year. His last newspaper job was Washington correspondent for the Miami Herald. Then WHAS-TV in Louisville made him an offer he couldn't refuse. He worked undercover for eight months to show how illegal gambling had corrupted politics and law enforcement in Louisville. His first documentaries there gained immediate national attention. Two years later, he returned to Miami as investigative reporter for WPLG-TV. During 12 years at WPLG, he won four Emmys and television's equivalent of the Pulitzer Prize three times (duPont-Columbia Awards). He left reporting when his first book was published to become a pioneer news media consultant and on-camera coach, training government and corporate executives how to cope with the news media. That first (and best-selling book) was Winning with the News Media - A Self Defense Manual When You're the Story. Now in its 9th Edition, it is considered by many to be the "bible" in its field. He describes it as "a book that teaches people like you how to deal with sons-of-bitches like me." He has four other books currently available in both print and e-book versions. He and his wife (Ellen Jaffe Jones, also an author and former TV investigative reporter) live on Anna Maria Island in the mouth of Tampa Bay. They sail a 28-foot Catalina.