All the Light We Cannot See: A Novel (CD-Audio) 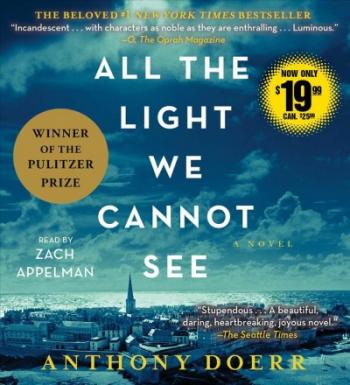 Marie-Laure is the precocious blind daughter of the master locksmith at Paris' Natural History Museum; Werner is a German orphan whose genius at fixing radio transmitters leads to an invitation to train at an academy for an elite segment of the Hitler Youth. How the two of them come together is a feat of extraordinary storytelling, flawless prose and astounding empathy. Anthony Doerr has managed something impossible here: a sprawling epic that reads quickly and with pleasure, a war novel that maintains the gravity of the history it draws from but never feels dreary or fatalistic. If you love period dramas, detail-rich stories from faraway places, or just plain old wonderful literary fiction, this is your perfect summer read. -Kea's July Staff Pick, 2014

“The French girl cannot see, but she can hear, feel, and explore the world around her like a budding naturalist. The German boy has no parents, but he teaches himself how coils of copper can receive lessons of love and learning. It's World War II, however, and the potential of thousands of children will be unrealized or thwarted. Will a mythical gemstone save them or unite them? Gorgeously written, Doerr's epic tale brings alive the beauty of two souls, their quest for learning, the turbulent times they cannot control, and the rock that mysteriously guides their fate.”
— Harriett Logan, Loganberry Books, Shaker Hts, OH

Winner of the 2015 Audie Award for Fiction

From Anthony Doerr, the highly acclaimed, multiple award-winning author of Cloud Cuckoo Land, the beautiful, stunningly ambitious instant New York Times bestseller about a blind French girl and a German boy whose paths collide in occupied France as both try to survive the devastation of World War II.

Marie-Laure lives in Paris near the Museum of Natural History, where her father works. When she is twelve, the Nazis occupy Paris and father and daughter flee to the walled citadel of Saint-Malo, where Marie-Laure’s reclusive great uncle lives in a tall house by the sea. With them they carry what might be the museum’s most valuable and dangerous jewel.

In a mining town in Germany, Werner Pfennig, an orphan, grows up with his younger sister, enchanted by a crude radio they find that brings them news and stories from places they have never seen or imagined. Werner becomes an expert at building and fixing these crucial new instruments and is enlisted to use his talent to track down the resistance. Deftly interweaving the lives of Marie-Laure and Werner, Doerr illuminates the ways, against all odds, people try to be good to one another.

Doerr’s “stunning sense of physical detail and gorgeous metaphors” (San Francisco Chronicle) are dazzling. Ten years in the writing, a National Book Award finalist, All the Light We Cannot See is a magnificent, deeply moving novel from a writer “whose sentences never fail to thrill” (Los Angeles Times).

Anthony Doerr is the author of Cloud Cuckoo Land, which was a finalist for the National Book Award, and All the Light We Cannot See, winner of the Pulitzer Prize, the Carnegie Medal, the Alex Award, and a #1 New York Times bestseller. He is also the author of the story collections Memory Wall and The Shell Collector, the novel About Grace, and the memoir Four Seasons in Rome. He has won five O. Henry Prizes, the Rome Prize, the New York Public Library’s Young Lions Award, the National Magazine Award for fiction, a Guggenheim Fellowship, and the Story Prize. Born and raised in Cleveland, Ohio, Doerr lives in Boise, Idaho, with his wife and two sons.