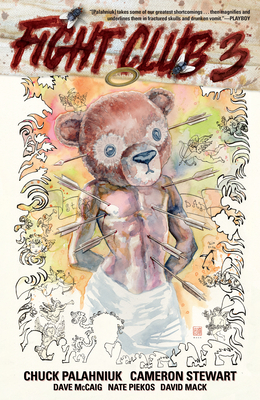 A new movement has replaced Project Mayhem, and even Tyler Durden doesn't know how to play by these rules.

Marla Singer is about to deliver her second child, but the daddy isn't her husband--it's Tyler, who's very invested in his heir, and the world he'll inherit, as Die Off Industries plots to fine-tune mankind.

Bestselling novelist Chuck Palahniuk is back with his greatest creation, the sequel to the book that spent six months on the 2016 New York Times bestseller list.

Teaming once again with award-winning artists Cameron Stewart and David Mack, Palahniuk leads a full frontal assault of the culture, from online dating to weaponized STDs, as a strange picture frame opens a road to paradise. 2019's bestselling twelve-issue series is collected in one massive hardcover.

Get in touch with your ugly side.

"Whether you've been a fan since the '90s or were hooked by the jump to comics, you'll want to see what comes next in this highly unpredictable saga."- PASTE MAGAZINE

"Fight Club 3 is everything that a sequel to a sequel should be. It elevates the dark themes of the novel and the first graphic novel to the next illogical, insanely violent step." - COMICON.COM

"Palahniuk's work takes some of our greatest shortcomings--insufficient or inadequate parenting, toxic isolation-- then magnifies and underlines them in fractured skulls and drunken vomit." - PLAYBOY

"The first rule of the comic book incarnation of Fight Club is that it'll look good." - HOLLYWOOD REPORTER

"The talent and care that went into this issue is palpable, from David Mack's cover to Nate Piekos' lettering... This book does not allow you to get comfortable." - COMICWATCH

"Stewart continues to do the Fight Club saga justice with his artwork...flies and all." - ROGUES PORTAL

"Bold...Palahniuk doesn't give us what we want here but rather what we need. Namely a story that makes the reader think not just about what's going on but also about their own expectations of the archetypes portrayed in the story; the flies buzzing on the page hinting at a character's intent; the name drop of "snowflake" for a caller I.D.; a subtle tattoo on the neck. All raising enough questions to leave us staring at every panel with the steely focus of a seasoned detective combing a crime scene for clues." - BIG COMIC PAGE

Chuck Palahniuk's ten previous novels are the bestselling Fight Club, which was made into a film by David Fincher; Survivor; Invisible Monsters; Choke, which was made into a film by director Clark Gregg; Lullaby, which is currently in development for film; Diary; Haunted; Rant; Snuff; and Pygmy. He is also the author of Fugitives and Refugees, a nonfiction profile of Portland, Oregon, published as part of the Crown Journeys series, and the nonfiction collection Stranger Than Fiction. He lives in the Pacific Northwest. Chuck's Make Something Up, a collection of short stories and one novella, was released in 2015, and Fight Club 2 the follow up to the enormously successful Fight Club, debuted June 2016 from Dark Horse Comics.