The New Jim Crow: Mass Incarceration in the Age of Colorblindness (MP3 CD) 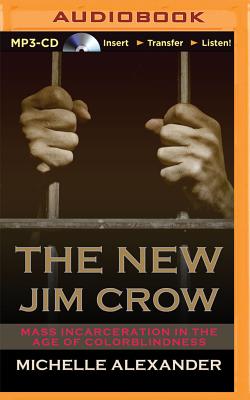 What an eye-opening book! Alexander has written a powerful book that makes the undeniable connections between race, "race-blind" legislation and criminal enforcement, and the rise in mass incarceration. She argues that post-Jim Crow legislation and enforcement pattern led to a different type of racial caste system. This one is not written in black & white, like Jim Crow, but the effects are just the same - the isolation and oppression of minorities. Powerful, moving argument delivered with honesty. -- Wintaye's Pick

“In The New Jim Crow, Michelle Alexander tirelessly researches both the legal history of America's Jim Crow past and the current legal policies that contribute to the mass incarceration of black people. The text adds significantly to scholarship that contextualizes rates of incarceration among blacks and critiques of social and economic inequality.”
— Bruce Smith, Colorado State University Bookstore, Fort Collins, CO