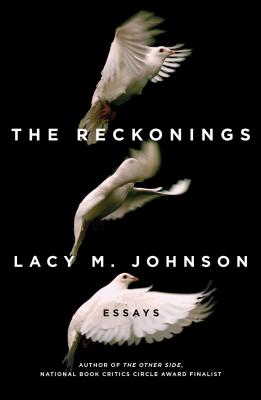 
Special Order
This extraordinary, timely new collection of essays by the award-winning writer of The Other Side—rooted in her own experience with sexual assault—pursues questions of justice, sexual violence, and retribution.

In 2014, Lacy Johnson was giving a reading from The Other Side, her “instant classic” (Kirkus Reviews) memoir of kidnapping and rape, when a woman asked her what she would like to happen to her rapist. This collection, a meditative extension of that answer, draws from philosophy, art, literature, mythology, anthropology, film, and other fields, as well as Johnson’s personal experience, to consider how our ideas about justice might be expanded beyond vengeance and retribution to include acts of compassion, patience, mercy, and grace.

From “Speak Truth to Power,” about the condition of not being believed about rape and assault; to “Goliath,” about the concept of evil; to “Girlhood in a Semi-Barbarous Age,” about the sacred feminine, “ideal woman,” and feminist art, Johnson creates masterful, elaborate, gorgeously written essays that speak incisively about our current era. She grapples with justice and retribution, truth and fairness, and sexual assault and workplace harassment, as well as the broadest societal wrongs: the BP Oil Spill, government malfeasance, police killings. The Reckonings is a powerful and necessary work, ambitious in its scope, which strikes at the heart of our national conversation about the justness of society.
Lacy Johnson is the author of The Reckonings and the memoir The Other Side, which was named a finalist for the National Book Critics Circle Award in Autobiography, the Dayton Literary Peace Prize, an Edgar Award in Best Fact Crime, and the CLMP Firecracker Award in Nonfiction. Her writing has appeared in The New Yorker, The New York Times, The Los Angeles Times, Virginia Quarterly Review, Tin House, Paris Review, Guernica, and elsewhere. She lives in Houston and teaches creative nonfiction at Rice University.

Praise for The Reckonings:

“Whether grappling with her own experiences of sexual violence and the justice system or her hometown’s struggle to recover from a devastating flood, Johnson always writes with clear eyes and an enormous heart.”
—Boston Globe, Best Books of 2018

"Unflinching and honest, The Reckonings seamlessly melds the personal and political into a collection that is both timely and timeless ... Lucid and compelling, Johnson's essays are not only bold and memorable, but insistent reminders that all good essays are, in fact, reckonings: attempts to work out problems, whether domestic, cosmic or both, on the page.”
—Houston Chronicle

“Looking for literature that will help you process the injustices and frustrations of today? Listen to Lacy M. Johnson, the sage we need…These essays are broad in scope — Lacy looks at the violence done against bodies, women, the environment — and uniformly astounding. A revelatory must-read.”
—Refinery 29, Best of 2018

“The Reckonings is not a book about changing the world. It's philosophy in disguise, equal parts memoir, criticism, and ethics. It has bits of Eula Biss, Leslie Jamison, and Simone Weil, but its patron saint is Grace Paley ... The 12 essays in The Reckonings are 12 beginnings. Each one deserves great consideration, while you read it and long after. Each one leaves the work up to you.”
—NPR.org

“In this searching collection of essays ...  Johnson explores ideas of  justice, retribution and mercy."
—Newsday

“A collection that converses with itself and the reader, asking us to question our beliefs and our roles in a system that perpetuates violence."
—The Millions

“The 12 essays collected in The Reckonings form a kind of song cycle on the subject of justice, with recurring motifs and a basso continuo of moral urgency. Themes develop, intersect, change key … It’s a lot of ground to cover, but Johnson dexterously arranges these disparate topics into a larger unity.”
—Texas Observer, Best Texas Books of 2018

"[Johnson's] essays on the violence humans inflict on each other and the earth—including racism, misogyny and a variety of pollutions—challenge our culture's expectations of justice and expose the limits of vengeance and mercy."
—Ms. Magazine

"The Reckonings is a beautiful and complicated collection of essays. In essence, these essays are an exploration of violence—sexual violence, environmental violence, racial violence, economic violence. It can be bleak, because Johnson writes about rape and mass shootings and nuclear waste. But it’s also intellectually rigorous, big-hearted, and nuanced. A gorgeous combination of personal narrative and investigative journalism, these essays ask more questions than they answer—in the best possible way.”
—BookRiot, Best Books of 2018

"Johnson writes with palpable compassion and brilliance, illuminating her deep humanity, while imbuing it in equal measure in the people she writes about and quotes.  That her influences include Audre Lorde, Simone Weil, Adrienne Rich makes for a clear understanding of what is constitutes the sacred ground on which she stands. Finally, the last essay—”Make way for joy”—actually coaxed a smile and made a wee spot for the possibility of hope in my crankitude. This is no small thing. I am grateful."
—LitHub

"This essay collection, which deals with bleeding-edge issues like sexual violence, social justice, and the misuse of power, feels like a necessary read for our times."
—Electric Literature, Best Nonfiction of 2018

"In The Reckonings, Johnson takes the extraordinary steps of considering the life of the man who attacked her and reflecting on what should happen to him ... The breadth of topics that Johnson takes on in response to this act of violence in her life is remarkable, and her answers present readers with a profile in courage that deserves wide recognition."
—Signature Reads

"Incredibly timely, this essay collection (in the vein of Rebecca Solnit and Maggie Nelson) seamlessly weaves Johnson’s own thoughts and experiences with philosophy, art, literature, film, mythology and anthropology to tackle questions of justice and retribution, truth and fairness, harassment and assault — and most important, how to translate these feelings into action."
—Cup of Jo

"In The Reckonings: Essays, Lacy M. Johnson reflects on justice and retribution and raises difficult questions, all while using own personal experiences with violence and injustice, as well as examples that affect the masses."
—Bustle

"These essays attempt to parcel out several knotted problems and suggest forms of meaningful
justice ... Johnson’s questions and answers are hard but necessary."
—Booklist, starred review

“Johnson excels at providing critical analysis of social justice and uses a variety of works, including mythology and film, to make the case for forging ahead with mercy and compassion. Her unflinching honesty and continuous quest for answers are woven throughout each essay, forming a thread that will have readers questioning their own beliefs. This beautifully written book packs a powerful punch. Those with a penchant for stories concerning individual rebirth in the aftermath of a traumatic event will flock to Johnson’s latest.”
—Library Journal

"[Johnson] makes a plea for activism, art, and ... common decency ... [in this] thoughtful and probing collection."
—Kirkus

“This is a hell of a book! Lacy M. Johnson has thought through issues most of us do not want to think about, and she has written a powerful and deeply compassionate confrontation with violence in its most personal forms. I can barely express how impressive this work is.”
—Dorothy Allison, author of Bastard Out of Carolina and Cavedweller

“Lacy M. Johnson’s The Reckonings is breathtaking. At the heart of this book of essays is both the body of an individual woman and the body of the world, both endlessly transgressed and yet able to endure with defiance and bold beauty. Whatever we mean when we say justice, Lacy M. Johnson reminds us how love must be threaded through the everything, a love that is a fierce life-force and not an apology. Here is a woman whose voice and body have moved through violence to refuse cultural inscription. Let that be song.”
—Lidia Yuknavitch, author of The Book of Joan and The Chronology of Water

"Through prose that is at once passionate and percussive, Lacy Johnson's The Reckonings demands that we place justice and discovery at the center of our conversations, memories, imaginations, and art. I don't know that I've ever been happier to be alive after reading any book. In this weird way that probably says way too much about the smallness of my life, I felt like everything would be okay -- like we will make and sustain justice -- because a book I needed but never imagined reading was in the world. The Reckonings is as important as it is masterful on the sentence and conceptual level. The Reckonings is proof that caring about this place, and getting lost in the minutiae of what makes us unjust might actually be a pre-req for creating incredible, life-altering, just art."
—Kiese Laymon, author of Heavy and How to Slowly Kill Yourself and Others in America

“In lyrical and stunning prose, Lacy M. Johnson responds to our ongoing violence—environmental, racist, sexist—and dares to imagine what repair might look like. Johnson is the best kind of witness—brave, brilliant, accountable, prophetic. Her essays are urgent, riveting. I couldn’t put this book down. Reading The Reckonings reminded me it’s possible to write our way into a new world.”
—Sarah Sentilles, author of Breaking Up with God and Draw Your Weapons

"Lacy M. Johnson's The Reckonings is an essay for thinking people, which, in an age where the essay is reduced at times to "click bait" headlines and recycled advice about dating and wellness, is the highest compliment. Johnson grapples with the fundamental issue of our time: what is justice? What is punishment? What is mercy? Johnson's beautiful writing and hard-won wisdom will make you think, and then think again. I am grateful for this book."
—Emily Rapp Black, author of Poster Child and The Still Point of the Turning World

“As ever, Lacy M. Johnson’s work here is ambitious and brave, and with The Reckonings she has written an essential book about what means to emerge from darkness, bounding step by bounding step. This brilliant collection of essays is a tour de force in empathy, an evocative work that invites us to consider how to make way for joy despite the unavoidable tragedies that shape our lives. With her keen eye closing the distance between the personal to the political, the constructed world and the environment, Johnson provides a compassionate vision of endurance and transformation in coming to terms with the facts of life as we now know them. Her writing engages the lyricism of poetry and the fortitude of reportage as she brings her own experiences of pain into conversation with others also still making their way despite loss.”
—Wendy S. Walters, author of Multiply/Divide and Troy, Michigan

Praise for Lacy Johnson and The Other Side:

"[Johnson's] writing style is engaging and redemptive, a trick accomplished partly by virtue of Johnson’s voice—clear and direct, but with a breezy archness that belies her story’s dark core."
—Texas Observer

"The frankness and eloquence of Johnson's writing puts this true-crime memoir in a league of its own."
—Marie Claire

"Johnson’s memoir is an extraordinary document, and she herself holds an important place in a movement to stop violence against women."
—The Rumpus

"[Johnson's] direct and honest prose not only evokes empathy, but an incendiary anger."
—Houston Press

"The Other Side is neither flowery nor stale, never shy or gratuitous. Instead, its haunting beauty grips the reader from the opening line ... Unforgettable."
—The Austin Chronicle

"[Johnson writes] with both fury and restraint. The reader feels pulled onto a fast train, in a compartment with a narrator telling an intimate and terrifying tale."
—Wall Street Journal