The Woman in Cabin 10 (Hardcover) 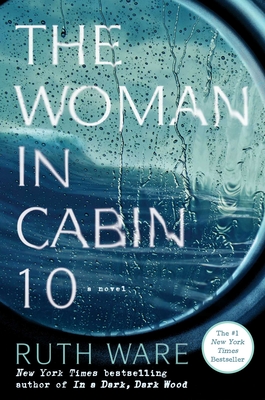 The Woman in Cabin 10 (Hardcover)

“When journalist Lo Blacklock sees someone throw a woman's body over the side of a small cruise ship, it should be clear that a crime has been committed. The problem? No one is missing. This is far from the travel magazine assignment that brought Lo on board, but she can't just give up. Something happened and she must find the answer. But can she do so without losing her own life? This is a fun read full of psychological thrills and twists that readers absolutely will not see coming.”
— Linda Bond (E), Auntie's Bookstore, Spokane, WA

Again, Ruth Ware writes the book of the summer!  This is one that you will not be able to put down.  Such a expertly crafted mystery with drunken journalists, an outrageously expensive and luxurious private cruise, beautiful surroundings, and an entire boat of suspects.  It is perfectly British and perfectly wonderful.  - Shane

FROM THE AUTHOR OF IN A DARK, DARK WOOD

An instant New York Times bestseller, The Woman in Cabin 10 is a gripping psychological thriller set at sea from an essential mystery writer in the tradition of Agatha Christie.

In this tightly wound, enthralling story reminiscent of Agatha Christie’s works, Lo Blacklock, a journalist who writes for a travel magazine, has just been given the assignment of a lifetime: a week on a luxury cruise with only a handful of cabins. The sky is clear, the waters calm, and the veneered, select guests jovial as the exclusive cruise ship, the Aurora, begins her voyage in the picturesque North Sea. At first, Lo’s stay is nothing but pleasant: the cabins are plush, the dinner parties are sparkling, and the guests are elegant. But as the week wears on, frigid winds whip the deck, gray skies fall, and Lo witnesses what she can only describe as a dark and terrifying nightmare: a woman being thrown overboard. The problem? All passengers remain accounted for—and so, the ship sails on as if nothing has happened, despite Lo’s desperate attempts to convey that something (or someone) has gone terribly, terribly wrong…

With surprising twists, spine-tingling turns, and a setting that proves as uncomfortably claustrophobic as it is eerily beautiful, Ruth Ware offers up another taut and intense read in The Woman in Cabin 10—one that will leave even the most sure-footed reader restlessly uneasy long after the last page is turned.
Ruth Ware worked as a waitress, a bookseller, a teacher of English as a foreign language, and a press officer before settling down as a full-time writer. She now lives with her family in Sussex, on the south coast of England. She is the #1 New York Times and Globe and Mail (Toronto) bestselling author of In a Dark, Dark Wood; The Woman in Cabin 10; The Lying Game; The Death of Mrs. Westaway; The Turn of the Key; One by One; The It Girl; and Zero Days. Visit her at RuthWare.com or follow her on Twitter @RuthWareWriter.

“A classic "paranoid woman" story with a modern twist in this tense, claustrophobic mystery...The cast of characters, their conversations, and the luxurious but confining setting all echo classic Agatha Christie; in fact, the structure of the mystery itself is an old one: a woman insists murder has occurred,everyone else says she's crazy. But Lo is no wallflower; she is a strong and determined modern heroine who refuses to doubt the evidence of her own instincts.”
— Kirkus Reviews

"Ruth Ware is back with her second hair-on-the-back-of-your-neck-tingling tale."
— Marie Claire

"[The Woman in Cabin 10] generate[s] a dark, desperate tension that will appeal to Ware’s and Gillian Flynn’s many fans. This is the perfect summer read for those seeking a shadowy counter to the sunshine."
— Booklist, Starred Review

“A fantasy trip aboard a luxury liner turns nightmarish for a young journalist in The Woman in Cabin 10, the pulse-quickening new novel by Ruth Ware, author of In a Dark, Dark Wood.”
— O Magazine

"[A] snappy thriller set on the high seas… The first chapter will grab your attention, force it against a wall and hold it there until the end.”
— Associated Press

"Ruth Ware’s The Woman in Cabin 10 is an atmospheric thriller as twisty and tension-filled as her 2015 debut, In a Dark, Dark Wood... The novel’s tone is dark and claustrophobic as Lo continues her search for the woman even though someone is trying to stop her — maybe even kill her."
— The Washington Post

"If you're a fan of Agatha Christie, get ready to curl up with this suspenseful mystery."
— Bustle

"The Woman in Cabin 10 bucks the trend of disappointing follow-ups, and is every bit as taut and provocative as the earlier book."
— Independent

"With a flawed but likeable heroine, and a fast moving plot, it makes for a stylish thriller."
— Sunday Mirror

“A twisted and suspenseful mystery that entangles friendship, identity and memory with a possible murder…. Subtly tips its hat to authors such as Agatha Christie and Dorothy L. Sayers”
— Metro

“With a churning plot worthy of Agatha Christie, and fresh on the heels of her bestselling thriller In a Dark, Dark Wood, Ruth Ware twists the wire on readers’ nerves once again. “Cabin 10” just may do to cruise vacations what “Jaws” did to ocean swimming. You’ll be afraid to go out on the water.”
— StarTribune

"This beach read thriller has sun, suspense, and goes well with SPF."
— TheSkimm

"Ware does something more than write the next Gone Girl or The Girl on the Train, even if she writes in that wheelhouse. Ware puts her own stamp on the genre... The Woman in Cabin 10 is good: it’s creepy, it’s frustrating, and it’s interesting. It brings elements of our current fixations into the realm of the thriller/mystery in the best possible way."
— Electric Literature

"With a churning plot worthy of Agatha Christie, and fresh on the heels of her bestselling thriller In a Dark, Dark Wood, Ruth Ware twists the wire on readers’ nerves once again. “Cabin 10” just may do to cruise vacations what “Jaws” did to ocean swimming."
— Minneapolis Star Tribune

"Ware's propulsive prose keeps readers on the hook and refuses to let anyone off until all has been revealed."
— Shelf Awareness

"No one does spooky without the supernatural element better than Ruth Ware, and The Woman in Cabin 10 is proof for any who doubt it."
— New York Journal of Books

"Lots of twists and surprises in an old-fashioned mystery."
— R.L. Stine