We Eat Our Own: A Novel (Hardcover) 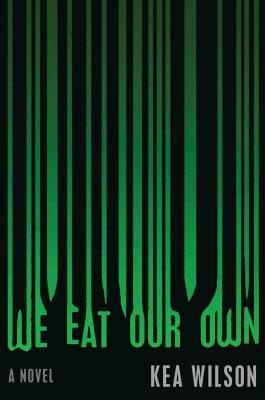 By Kea Wilson
This book might be hard to find. Ask a bookseller for more information.
Hard to Find

I loved so many things about this book. The characters were heartfelt, the plot was intense, the historical story it was inspired by is insane, and everything pays off so well. The story revolves around the making of a horror film set in the Amazon. The way Wilson captures the dangerous feel of the jungle, the drug trade, and humans, in general, is so thrilling. Pick it up and let the fear wash over you.  -Shane's Pick September 2016

I loved so many things about this book. The characters were heartfelt, the plot was intense, the historical story it was inspired by is insane, and everything pays off so well. The story revolves around the making of a horror film set in the Amazon. The way Wilson captures the dangerous feel of the jungle, the drug trade, and humans, in general, is so thrilling. Pick it up and let the fear wash over you.

I loved so many things about this book. The characters were heartfelt, the plot was intense, the historical story it was inspired by is insane, and everything pays off so well. The story revolves around the making of a horror film set in the Amazon. The way Wilson captures the dangerous feel of the jungle, the drug trade, and humans, in general, is so thrilling. Pick it up and let the fear wash over you.

A stunning debut, We Eat Our Own will grab hold of you from the first page and refuse to let go. The story of a harrowing film shoot in the isolated depths of the Amazon rainforest during which even those who think they have total control learn that there is no such thing, this blend of mystery, horror, and literary fiction manages to feel both epic and claustrophobic, making for a uniquely atmospheric read. Pick it up at your own risk; you may not be able to easily put it back down. - Sarah

An ambitious debut novel by an original young writer, We Eat Our Own blurs the lines between life and art with the story of a film director’s unthinkable experiment in the Amazon.

When a nameless, struggling actor in 1970s New York gets the call that an enigmatic director wants him for an art film set in the Amazon, he doesn’t hesitate: he flies to South America, no questions asked. He quickly realizes he’s made a mistake. He’s replacing another actor who quit after seeing the script—a script the director now claims doesn’t exist. The movie is over budget. The production team seems headed for a breakdown. The air is so wet that the celluloid film disintegrates.

But what the actor doesn’t realize is that the greatest threat might be the town itself, and the mysterious shadow economy that powers this remote jungle outpost. Entrepreneurial Americans, international drug traffickers, and M-19 guerillas are all fighting for South America’s future—and the groups aren’t as distinct as you might think. The actor thought this would be a role that would change his life. Now he’s worried if he’ll survive it.

Inspired by a true story from the annals of 1970s Italian horror film, and told in dazzlingly precise prose, We Eat Our Own is a resounding literary debut, a thrilling journey behind the scenes of a shocking film and a thoughtful commentary on violence and its repercussions.

“Joining the ranks of recent hotly anticipated crime novels such as The Girls, Kea Wilson’s We Eat Our Own steps back to the 1970s with a blood-curdling horror story about making a movie in the Amazon.”
—Playboy

"An exciting, impressive debut ... one of the pleasures of “We Eat Our Own” is its attention to the inner workings of horror films. Wilson’s novel is a kind of all-access pass to the movie set."
—St. Louis Post-Dispatch

"Like Cannibal Holocaust, Wilson's debut wrestles with real versus simulated violence, with Velluto getting the punchline: "There's no such thing as murder in the jungle." This is the smartest kind of horror, one that understands and employs the trappings while making us squirmingly aware of the moral contortions required to enjoy them. A highly unusual breath of fetid air."
—Booklist, starred review

"In Wilson’s gripping, ambitious debut novel, a struggling actor flies to the rain forests of Colombia to star in Jungle Bloodbath, a grind house horror film directed by an eccentric Italian auteur … The drama builds palpably and haphazardly, drawing the invading crew and invaded population together until, in a moment of cathartic bloodshed, reality and fiction collide … the story never flags thanks to the ferocious momentum of [Wilson’s] prose. This is a vivid, scary novel."
—Publishers Weekly

"Inspired by actual events, Wilson shows impressive command of a narrative that weaves back and forth and back again in both time and locale; much like the viewer of a pseudo-documentary horror movie (ever seen The Blair Witch Project?), you wonder throughout whether you should trust whatever it is you're told—and jumping to the end won't help at all. You shouldn't anyway, because Wilson's writing style is hypnotic, tightly wound, and harrowingly evocative of the story's stifling, bug-heavy atmosphere. Even the sunniest skies of this ill-starred shoot are thick with menace and portent. Keep telling yourself, "It's only a novel, it's only a novel" ... except an author's note at the end says it's inspired by actual events."
—Kirkus Reviews

"Kea Wilson has written an ambitious, multi-layered novel that follows a director’s dark vision into the depths of the jungle, and into a secret world of political anarchy, murder, and war."
—Atticus Lish, author of Preparation for the Next Life, winner of the PEN/Faulkner Award

"This is a big, fast novel—bigger than it looks, full of surprises—and it never rests. It launches into the South American jungle and finds trouble there in the form of layer upon layer of perilous and tenuous reality: in the midst of a movie and in the movie inside that movie, in a village overrun by the landscape, among tribes real and fabricated, and in the middle of a power struggle between drug cartels and guerrilla groups, under threat of a war that may be only as genuine as the cannibals. Kea Wilson writes beautifully from a wide range of perspectives. This one is hard to put down."
—Marshall Klimasewiski, author of The Cottagers and Tyrants

"The jungle is alive and everywhere in Kea Wilson's remarkable debut novel, gorgeous and indifferent, it's ravening appetite the very real horror unleashed by human heedlessness and hubris. Denied all explanation of motivation by his Kurtz-like director, a young American actor finds himself on a harrowing journey, taking us with him—spellbound, resistless—into ‘one of the dark places of the earth.'"
—Kathryn Davis, author of Duplex and The Thin Place

"Reading We Eat Our Own is like floating down a long dark twisting river, the jungle closing in. You know you should turn back, but as in any nightmare or horror flick: you can't. Wilson's whip-smart prose tugs you on, ever deeper into the book's bloody heart. A daredevil debut by a talented young writer."
—Danielle Dutton, author of Margaret the First and publisher of the Dorothy Project