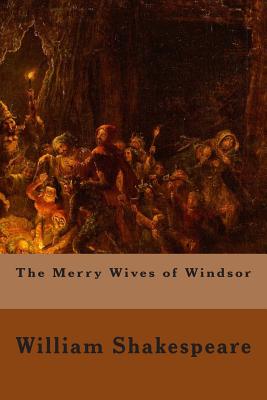 
Ships quickly (1-7 days)
(This book cannot be returned.)
The Merry Wives of Windsor is a comedy by William Shakespeare, first published in 1602, though believed to have been written prior to 1597. The Windsor of the play's title is a reference to Windsor Castle in Berkshire, England, and though nominally set in the reign of Henry IV, the play makes no pretence to exist outside contemporary Elizabethan era English middle class life. It features the character Sir John Falstaff, the fat knight who had previously been featured in Henry IV Parts 1 and 2. It has been adapted for the opera on several occasions. The play is nominally set in the early 15th century, during the same period as the Henry IV plays featuring Falstaff, but there is only one brief reference to this period, a line in which the character Fenton is said to have been one of Prince Hal's rowdy friends (he "kept company with the wild prince and Poins"). In all other respects, the play implies a contemporary setting of the Elizabethan era, c. 1600. Falstaff arrives in Windsor very short on money. He decides, to obtain financial advantage, that he will court two wealthy married women, Mistress Ford and Mistress Page. Falstaff decides to send the women identical love letters and asks his servants - Pistol and Nym - to deliver them to the wives. When they refuse, Falstaff sacks them, and, in revenge, the men tell Ford and Page (the husbands) of Falstaff's intentions. Page is not concerned, but the jealous Ford persuades the Host of the Garter Inn to introduce him to Falstaff as a 'Master Brook' so that he can find out Falstaff's plans. Meanwhile, three different men are trying to win the hand of Page's daughter, Anne Page. Mistress Page would like her daughter to marry Doctor Caius, a French physician, whereas the girl's father would like her to marry Master Slender. Anne herself is in love with Master Fenton, but Page had previously rejected Fenton as a suitor due to his having squandered his considerable fortune on high-class living. Hugh Evans, a Welsh parson, tries to enlist the help of Mistress Quickly (servant to Doctor Caius) in wooing Anne for Slender, but the doctor discovers this and challenges Evans to a duel. The Host of the Garter Inn prevents this duel by telling both men a different meeting place, causing much amusement for himself, Justice Shallow, Page and others. Evans and Caius decide to work together to be revenged on the Host. Key themes of Merry Wives include love and marriage, jealousy and revenge, social class and wealth. Explored with irony, sexual innuendo, sarcasm, and stereotypical views of classes and nationalities, these themes help to give the play something closer to a modern-day view than is often found in Shakespeare's plays. The play is centred on the class prejudices of middle-class England. The lower class is represented by characters such as Bardolph, Nym, and Pistol (Falstaff's followers), and the upper class is represented by Sir John Falstaff and Master Fenton. Shakespeare uses both Latin and misused English to represent the attitudes and differences of the people of this era. For example, much humor is derived from the exaggerated accents of Dr. Caius and Sir Hugh Evans. For example, Caius speaks in an exaggerated French dialect; when he finds out he has married a page instead of Mistress Anne he exclaims that he has married "oon garcon", and Evans speaks in a thick Welsh accent to the point that Falstaff complains that he "makes fritters of English" (5,5,135) Much of the comedic effect of the play is derived from misunderstandings between characters. Other scholars say that the treatment of sexual jealousy in the play differs from its treatment in others, like Othello and A Winter's Tale. The jealousy of Leontes and Othello is dangerous and deep-seated, while Ford's jealousy is something to be mocked and laughed at.