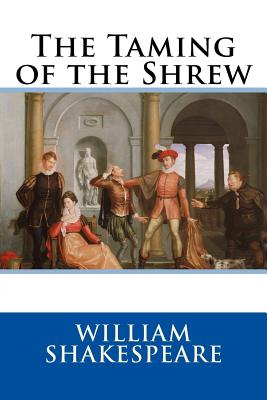 The Taming of the Shrew is a comedy by William Shakespeare, believed to have been written between 1590 and 1592. The play begins with a framing device, often referred to as the induction, in which a mischievous nobleman tricks a drunken tinker named Christopher Sly into believing he is actually a nobleman himself. The nobleman then has the play performed for Sly's diversion. The main plot depicts the courtship of Petruchio and Katherina, the headstrong, obdurate shrew. Initially, Katherina is an unwilling participant in the relationship; however, Petruchio "tames" her with various psychological torments, such as keeping her from eating and drinking, until she becomes a desirable, compliant, and obedient bride. The subplot features a competition between the suitors of Katherina's younger sister, Bianca, who is seen as the "ideal" woman. The question of whether the play is misogynistic or not has become the subject of considerable controversy, particularly among modern scholars, audiences, and readers. Prior to the first act, an induction frames the play as a "kind of history" played in front of a befuddled drunkard named Christopher Sly who is tricked into believing that he is a lord. The play is performed in order to distract Sly from his "wife," who is actually Bartholomew, a servant, dressed as a woman. In the play performed for Sly, the "shrew" is Katherina, the eldest daughter of Baptista Minola, a lord in Padua. Numerous men, including Gremio and Tranio, deem Katherina an unworthy option for marriage because of her notorious assertiveness and willfulness. On the other hand, men such as Hortensio and Gremio are eager to marry her younger sister Bianca. However, Baptista has sworn Bianca is not allowed to marry until Katherina is wed; this motivates Bianca's suitors to work together to find Katherina a husband so that they may compete for Bianca. The plot thickens when Lucentio, who has recently come to Padua to attend university, falls in love with Bianca. Overhearing Baptista say that he is on the lookout for tutors for his daughters, Lucentio devises a plan in which he disguises himself as a Latin tutor named Cambio in order to woo Bianca behind Baptista's back and meanwhile has his servant Tranio pretend to be him. In the meantime, Petruchio, accompanied by his servant Grumio, arrives in Padua from Verona. He explains to Hortensio, an old friend of his, that since his father's death he has set out to enjoy life and wed. Hearing this, Hortensio recruits Petruchio as a suitor for Katherina. He also has Petruchio present Baptista a music tutor named Litio (Hortensio in disguise). Thus, Lucentio and Hortensio, attempt to woo Bianca while pretending to be the tutors Cambio and Litio. To counter Katherina's shrewish nature, Petruchio pretends that any harsh things she says or does are actually kind and gentle. Katherina agrees to marry Petruchio after seeing that he is the only man willing to counter her quick remarks; however, at the ceremony Petruchio makes an embarrassing scene when he strikes the priest and drinks the communion wine. After the wedding, Petruchio takes Katherina to his home against her will. Once they are gone, Gremio and Tranio (disguised as Lucentio) formally bid for Bianca, with Tranio easily outbidding Gremio. However, in his zeal to win, he promises much more than Lucentio actually possesses. When Baptista determines that once Lucentio's father confirms the dowry, Bianca and Tranio (i.e. Lucentio) can marry, Tranio decides that they will need someone to pretend to be Vincentio, Lucentio's father. Meanwhile, Tranio persuades Hortensio that Bianca is not worthy of his attentions, thus removing Lucentio's remaining rival.