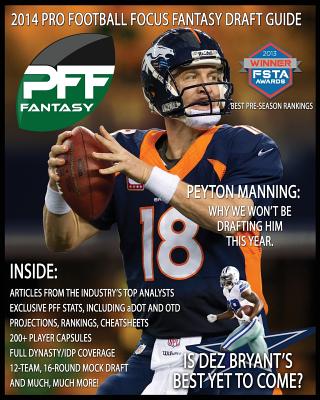 By Mike Clay
$7.49
Not on our shelves at the moment, but we will order it for you.
(This book cannot be returned.)

Get the most advanced fantasy football advice available with the 2014 Pro Football Focus Fantasy Draft Guide.

Mike Clay is the Director/Managing Editor at Pro Football Focus Fantasy. Mike oversees all PFF Fantasy content and business operations. He was featured as a Virtual Analyst in EA Sports' Madden 25 and Madden 15 video games. He is a member of the Pro Football Writers of America (PFWA) and is on the Fantasy Sports Writers Association (FSWA) Board of Directors and Hall of Fame voting committee. Mike won the 2013 Fantasy Sports Trade Association (FSTA) award for most-accurate preseason player rankings and is No. 1 over the last two years in FantasyPros' weekly ranking accuracy. He won the FSWA award for the best online article in 2013. A stat-head, Mike has created several advanced football statistics, including average depth of target (aDOT) and opportunity-adjusted touchdowns (OTD). He broke the first free agent signing of 2013 when Martellus Bennett signed with Chicago. Mike is responsible for the award-winning offensive player projections provided at PFF Fantasy. Mike also contributes to NBC's Rotoworld.com, ESPN Insider, and Athlon Sports, and has contributed at PhiladelphiaEagles.com. He participates in several high stakes leagues each year, including Rotobowl, FFPC, and Going Deep. Originally from Pottsville, PA, Mike now resides in Fleetwood PA with his wife Mandie and daughter Kacie.