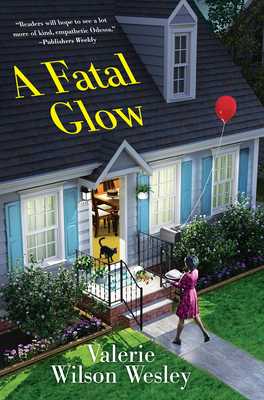 This is book number 2 in the An Odessa Jones Mystery series.

From the award-winning creator of Newark private eye Tamara Hayle, the second installment in a spell-binding cozy mystery series featuring a multicultural cast and starring Odessa Jones, a recent widow with a brand new catering business, a full-time real estate gig, and the gift of second sight. When a wealthy businessman dies during a catered brunch, it’s up to Odessa to find the culprit…with a little help from her spirited aunt, loyal co-workers, mischievous cat Juniper and her own psychic skills…

Recently widowed Odessa Jones is sure the exclusive catering job she’s scored from wealthy businessman Casey Osborne will propel her catering career into the big leagues. So when Dessa’s pesky second sight warns her that Osborne is bad news, she ignores it. She wishes she hadn’t when he drops dead at his brunch after sampling her homemade preserves. Osborne’s death is declared a homicide. Dessa and the friends who helped her cook are considered suspects…

To clear her name and find the truth, Dessa delves into Casey Osborne’s life. Everyone from his sinister business partner to his tormented ex-wife has reason to kill him—and the opportunity to do it. With the help of her spirited aunt, loyal co-workers and mischievous cat Juniper, she desperately searches for answers. Until a second murder leads Dessa down a frightening path filled with insidious hidden agendas—and someone poised to change her life forever.

Praise for A Glimmer of Death

“Wesley perfectly captures her protagonist’s emotions, including the lingering melancholy she feels for her late husband. . . . Readers will hope to see a lot more of kind, empathetic Odessa.” —Publishers Weekly
Valerie Wilson Wesley is the award-winning author of the Blackboard bestselling Tamara Hayle Mystery Series and the Odessa Jones Mysteries, as well as adult fiction, children’s books, and paranormal romance (under the name Savanna Welles). She is the recipient of numerous honors, including the Excellence in Adult Fiction Award from the Black Caucus of the American Library Association, the National Association of Black Journalists Griot Award, the Amigirls Book Club Author of the Year and the Literary Beacon Award from the national Go On Girls Book Club. A former executive editor of Essence® Magazine and Sisters in Crime board member, she is currently an artist-in-residence at the Cicely Tyson School of Performing Arts in East Orange, New Jersey. Wesley is a graduate of Howard University and holds master’s degrees from the Bank Street College of Education and the Columbia Graduate School of Journalism. She is married to noted screenwriter and playwright Richard Wesley and has two adult daughters. She can be found online at ValerieWilsonWesley.com.

BE SURE TO READ THE FIRST
ODESSA JONES MYSTERY!

A GLIMMER OF DEATH

“The creator of Newark private eye Tamara Hayle dials back the wisecracks and bumps up the paranormal hints to launch a new series featuring a widowed African American realtor whose workplace is a hot mess.”
—Kirkus Reviews

“Widow Odessa Jones, the psychically gifted narrator of this strong series launch from Wesley, can see glimmers, auralike colors that correspond to a person’s emotional state. . . . Wesley perfectly captures her protagonist’s emotions, including the lingering melancholy she feels for her late husband. . . . Readers will hope to see a lot more of kind, empathetic Odessa.”
—Publishers Weekly

“There's crispness in Wesley’s plotting and sparkle in the supporting characters....There’s also something oddly comforting about a black woman in fiction who isn’t weighed down by societal pathology and who can appreciate a good glass of merlot and reruns of Downton Abbey as much as the next woman. In between heavier mystery fare, this unicorn of a black cozy is a welcome palate cleanser.”
—Los Angeles Times