When Sunflowers Bloomed Red: Kansas and the Rise of Socialism in America (Hardcover) 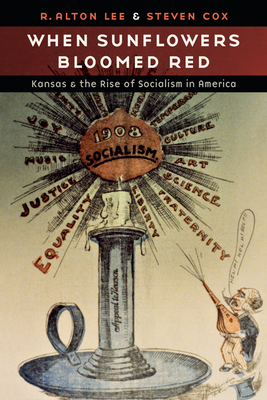 When Sunflowers Bloomed Red reveals the origins of agrarian radicalism in the late nineteenth-century United States. Great Plains radicals, particularly in Kansas, influenced the ideological principles of the Populist movement, the U.S. labor movement, American socialism, American syndicalism, and American communism into the mid-twentieth century. Known as the American Radical Tradition, members of the Greenback Labor Party and the Knights of Labor joined with Prohibitionists, agrarian Democrats, and progressive Republicans to form the Great Plains Populist Party (later the People’s Party) in the 1890s.

The Populists called for the expansion of the money supply through the free coinage of silver, federal ownership of the means of communication and transportation, the elimination of private banks, universal suffrage, and the direct election of U.S. senators. They also were the first political party to advocate for familiar features of modern life, such as the eight-hour workday for agrarian and industrial laborers, a graduated income tax system, and a federal reserve system to manage the nation’s money supply. When the People’s Party lost the hotly contested election of 1896, members of the party dissolved into socialist and other left-wing parties and often joined efforts with the national Progressive movement.

When Sunflowers Bloomed Red offers readers entry into the Kansas radical tradition and shows how the Great Plains agrarian movement influenced and transformed politics and culture in the twentieth century and beyond.

R. Alton Lee is a professor emeritus of history at the University of South Dakota. He is the author of several books, including Publisher for the Masses, Emanuel Haldeman-Julius (Bison Books, 2018) and Farmers vs. Wage Earners: Organized Labor in Kansas, 1860–1960 (Nebraska, 2008). Steven Cox is an associate professor and curator of special collections and university archives at Pittsburg State University. He is the editor of Once I Too Had Wings: The Journals of Emma Bell Miles, 1908–1918.

"When Sunflowers Bloomed Red is a welcome addition to the history of the American Midwest that should have appeal to students, scholars, and general readers."—Greg Hall, Annals of Iowa

"When Sunflowers Bloomed Red is a carefully researched and thoughtfully written history of socialism in Kansas. It offers a model for understanding both the popularity of socialism in mid-America and the reasons why it ultimately failed to mount an effective challenge to industrial capitalism. Perhaps most importantly, the book serves as a reminder that the economic system so many Americans now see as natural was highly contested for much of the early twentieth century."—Michael Pierce, Missouri Historical Review

“R. Alton Lee and Steve Cox weave radical movements into an intricate web that reveals their vibrancy, their successes, and their failures. Ever a hotbed of radical thought and radical people, Kansas, often before the rest of the nation, embraced the equality of women, the need to organize and protect laborers and farmers, and the common sense of municipal ownership of utilities. When Sunflowers Bloomed Red gives Kansas its rightful place as a center of alternative thinking about democracy in these United States; it serves as both guide and inspiration.”—Thomas Fox Averill, professor emeritus of English, Washburn University of Topeka, and first director, Center for Kansas Studies