Measure for Measure: A Play (Paperback) 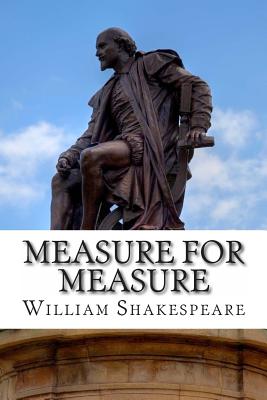 Measure for Measure is a play by William Shakespeare, believed to have been written in 1603 or 1604. It was (and continues to be) classified as comedy, but its mood defies those expectations. As a result and for a variety of reasons, some critics have labelled it as one of Shakespeare's problem plays. Originally published in the First Folio of 1623 (where it was first labelled as a comedy), the play's first recorded performance was in 1604. The play deals with the issues of mercy, justice, and truth and their relationship to pride and humility: "Some rise by sin, and some by virtue fall." The play draws on two distinct sources. The original is "The Story of Epitia," a story from Cinthio's Hecatommithi, first published in 1565. Shakespeare was familiar with this book as it contains the original source for Shakespeare's Othello. Cinthio also published the same story in a play version with some small differences, of which Shakespeare may or may not have been aware. The original story is an unmitigated tragedy in that Isabella's counterpart is forced to sleep with Angelo's counterpart, and her brother is still killed. The other main source for the play is George Whetstone's 1578 lengthy two-part closet drama Promos and Cassandra, which itself is sourced from Cinthio. Whetstone adapted Cinthio's story by adding the comic elements and the bed and head tricks. The title, which appears as a line of dialogue in the play, is usually thought to be a reference to the Bible, Matthew 7:2: For in the same way you judge others, you will be judged, and with the measure you use, it will be measured to you.