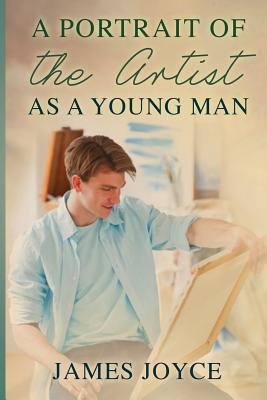 "His heart danced upon her movements like a cork upon a tide. He heard what her eyes said to him from beneath their cowl and knew that in some dim past, whether in life or revery, he had heard their tale before."
--- James Joyce, A Portrait of the Artist as a Young Man A Portrait of the Artist as a Young Man is the first novel of Irish writer James Joyce. A K nstlerroman in a modernist style, it traces the intellectual and religio-philosophical awakening of young Stephen Dedalus, a fictional alter ego of Joyce and an allusion to Daedalus, the consummate craftsman of Greek mythology. Stephen questions and rebels against the Catholic and Irish conventions under which he has grown, and culminates with his self-exile from Ireland in Europe. The work uses techniques that Joyce developed more fully in Ulysses (1922) and Finnegans Wake (1939). A Portrait began life in 1903 as Stephen Hero-a projected 63-chapter autobiograhical novel in a realistic style. After 25 chapters, Joyce abandoned Stephen Hero in 1907 and set to reworking its themes and protagonist into a condensed five-chapter novel, dispensing with strict realism and making extensive use of free indirect speech that allowed the reader to peer into Stephen's developing consciousness. American modernist poet Ezra Pound had the novel serialized in the English literary magazine The Egoist in 1914 and 1915, and published as a book in 1916 by B. W. Huebsch of New York. The publication of A Portrait and the short story collection Dubliners (1914) earned Joyce a place at the forefront of literary modernism. Adaptations A film version, adapted for cinema by Judith Rascoe and directed by Joseph Strick, was released in 1977. It featured Bosco Hogan as Stephen Dedalus and T. P. McKenna as Simon Dedalus. John Gielgud played Father Arnall, the priest whose lengthy sermon on Hell terrifies the teenage Stephen. Hugh Leonard's stage work Stephen D is an adaptation of Portrait of the Artist as a Young Man and Stephen Hero. It was first produced at the Gate Theatre, during the Dublin Theatre Festival of 1962.

James Augustine Aloysius Joyce (2 February 1882 - 13 January 1941) was an Irish novelist and poet, considered to be one of the most influential writers in the modernist avant-garde of the early 20th century. Joyce is best known for Ulysses (1922), a landmark work in which the episodes of Homer's Odyssey are paralleled in an array of contrasting literary styles, perhaps most prominent among these the stream of consciousness technique he perfected. Other major works are the short-story collection Dubliners (1914), and the novels A Portrait of the Artist as a Young Man (1916) and Finnegans Wake (1939). His complete oeuvre also includes three books of poetry, a play, occasional journalism, and his published letters. Joyce was born into a middle class family in Dublin, where he excelled as a student at the Jesuit schools Clongowes and Belvedere, then at University College Dublin. In his early twenties he emigrated permanently to continental Europe, living in Trieste, Paris and Zurich. Though most of his adult life was spent abroad, Joyce's fictional universe does not extend far beyond Dublin, and is populated largely by characters who closely resemble family members, enemies and friends from his time there; Ulysses in particular is set with precision in the streets and alleyways of the city. Shortly after the publication of Ulysses he elucidated this preoccupation somewhat, saying, "For myself, I always write about Dublin, because if I can get to the heart of Dublin I can get to the heart of all the cities of the world. In the particular is contained the universal."