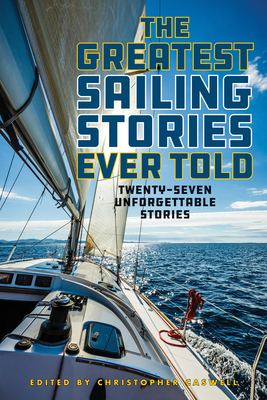 
Ships quickly (1-7 days)
For thousands of years, man has sailed into battle, sailed for rumored wealth, and sailed for pure adventure. And for nearly as long, stories about the sea have entertained, intrigued, and inspired readers. The Greatest Sailing Stories Ever Told brings together some of the most compelling writing of the millennium. Here is Peter Goss's wrenching narrative of incredible courage in the world's most desolate ocean along with Ernest Shackleton's understated and awesome account of one of the most daring small-boat journeys ever taken, where failure meant certain death for his long-suffering crew. But sailing is much more than headlong dashes into roaring seas. You'll also find William F. Buckley Jr. on idyllic cruising; James Thurber on the arcane and often impenetrable language of sailors; and the legendary Joshua Slocum on sailing alone around the world. The Greatest Sailing Stories Ever Told is a treasure trove: tears, adrenaline, laughter, and adventure abound. With contributions from: - James Thurber -William F. Buckley Jr. - Ann Davison - Sterling Hayden - Ernest Shackleton - Tristan Jones - Samuel Eliot Morrison - Joshua Slocum - E. B. White - C. S. Forester - Cleveland Amory - Weston Martyr - Peter Goss - David Kasanof - and many others.
Christopher Caswell has been a boating enthusiast and journalist for more than thirty years. He was the senior editor of Yachting magazine for ten years, the editor of Sea magazine for seven years, and writes regularly for the major boating publications. He is the author of five other books, including Smarter Charters, Megayachts 2000, The Illustrated Book of Basic Boating, and Championship Dinghy Sailing.