Much Ado About Nothing (Paperback) 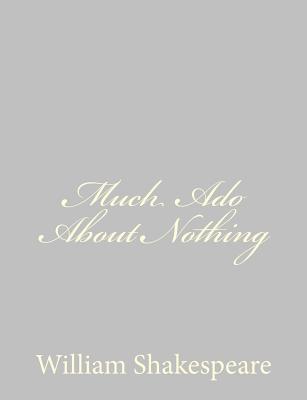 Much Ado About Nothing of the Ratna Sagar Shakespeare Series is enriched with complete text of the original play, plenty of short notes that explain and interpret the text, summary of each scene, as well as useful commentary on the life and times of Shakespeare, Elizabethan theatre, sources and genre, characters, plot, themes, and motifs, literary devices and figures of speech. A comedy of errors, the title of the play is justified by the utter confusion in the plot that arises out of nothing. Replete with sparkling dialogues, the play has also been described as a comedy of wit. This edition of Much Ado About Nothing is enriched with exhaustive annotations and notes.This enriched edition of Much Ado About Nothing has exhaustive annotations and notes. As suggested by its title, the play is a comedy of errors in which a lot of fuss and confusion is created over nothing. The title also plays on the word 'nothing', pronounced as 'noting' in Elizabethan English. 'Noting' refers to the manner in which people note or eavesdrop, and pass on information. The action over the course of the play largely arises because of noting and deceit, as the characters are directly or indirectly affected by eavesdropping and gossip. Claudio and Hero's relationship suffers due to the malicious misinformation of Don John and Borachio. On the other hand, Benedick and Beatrice's relationship develops as a result of the well-intended deceit and gossip of Don Pedro, Claudio, Leonato, Hero, and Ursula. Set in Messina, Italy, the action of the play mostly takes place in and around the house of Leonato, the Governor of Messina, who lives with his daughter, Hero, and his witty niece, Beatrice. The play commences with Don Pedro, the Prince of Arragon, and his followers Benedick and Claudio visiting Leonato with the prince's illegitimate brother Don John, who had rebelled against him but is now reconciled. It is revealed that Claudio loves Hero and wishes to propose to her. While the Claudio-Hero relationship forms the main plot of the play, the sub-plot is provided by the love-hate relationship between Benedick and Beatrice, whose interactions oscillate between fondness and witty sarcasm from the very beginning. In the initial part of the play, there is a masked dance in which Don Pedro pretends to be Claudio, woos Hero on his behalf, and asks Leonato for Hero's hand in marriage to Claudio. As all is settled for the prospective marriage of Claudio and Hero within a week, the bitter and sullen Don John concocts a plan with his underling Borachio to spoil the happiness of Claudio, the 'young start-up' who 'hath all the glory of my overthrow'. As a game of deceit and manipulation begins, Don John and Borachio execute their plan to lead Claudio into believing Hero's infidelity. An enraged Claudio shames and rejects Hero in front of the wedding congregation the next day. Leonato is devastated, and Hero faints, at which Claudio and Don Pedro leave her for dead. Friar Francis believes in Hero's innocence, and devises the plan to publish the report of her death so as to convert the slander against her into pity, and make Claudio realize her worth and repent for disgracing her. Meanwhile, the scene shifts to the members of the Watch, with the head constable Dogberry, his partner Verges, and two watchmen. Although they are the comedians of the play, these farcical detectives are the ones who finally uncover the truth of Don John's villainy. Once Don John's plot is revealed, Don Pedro and Claudio repent for their action and apologize to Leonato, who asks Claudio to hang an epitaph on Hero's 'tomb', and then marry his 'niece', who is 'the copy of my child that's dead', as penance. Claudio agrees, and on the day of the wedding the lady is revealed to be none other than Hero herself. With the resolution of the Claudio-Hero relationship, Benedick and Beatrice too confess their love for each other, but not without the customary bout of wit. A messenger arrives to inform all that Don John has been captured while trying to flee. With poetic justice served and all conflicts resolved, the play ends with a celebratory dance.